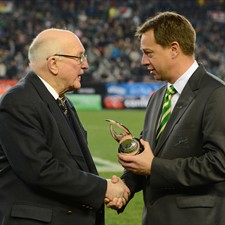 In a life devoted to Rugby, not just as a referee, but also as a schools coach and writer, Dobson has made an exceptional contribution to the Game in South Africa since taking the whistle of his first match in 1955, while a student in Pietermaritzburg.

He joined the Western Province Referees Society in 1968 and took charge of more than 40 first class matches, becoming renowned for his authoritative, knowledgeable and fair style.

“The IRB Referee Award for Distinguished Service recognises those who have contributed significantly to the area of officiating and there are few who have given more to referee development in South Africa than Paul Dobson. His contribution to the Game over five decades as a referee, referee administrator and schools coach has changed the landscape of refereeing in the nation,” said Roux.

“He is an icon of refereeing in South Africa and is the mentor of guys like Andre Watson and other leading South African referees.”

One of Dobson’s lasting legacies was his drive to unify the two different Referees’ Societies in South Africa, representing the then different Unions. By the end of 1991, Dobson had successfully navigated the merger and the referees were the first Rugby body to achieve this, a year ahead of the Unions becoming joined.

“It’s always nice when your own people recognise you,” said Dobson after receiving the Award. “But, they didn’t have to do it.”

“Danie Craven said, ‘If you love something you never have to make sacrifices’, so I’ve never made sacrifices or felt I was serving. I loved doing it. I loved being with referees, I loved the whole business of refereeing and I’ve been one since 1968.”

“It’s the friendship of it, being part of Rugby football in a very special way. I’ve met marvellous people from all over the world and that’s been great. I’ve enjoyed it enormously,” added Dobson.

Dobson has, in recent years, turned his hand to Rugby writing and his books on the Game include: The Official History of South African Rugby, Doc: An Autobiography of Danie Craven and biographies on Nick Mallett and Andre Watson. He also manages content for the SARU Referees website.

Dobson’s career as a school master saw him become South Africa’s youngest headmaster when he was appointed to the role at St Charles aged just 25. He joined the Bishops staff as a Latin teacher and during his 27 years on the staff he coached the under 15s and 16s.

The IRB Referee Award for Distinguished Service is the second of the IRB Awards to be presented in 2012.