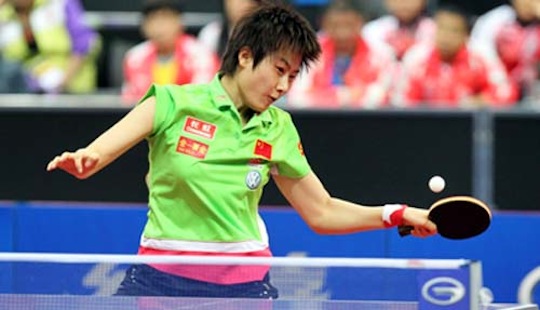 Lausanne, May 11, 2012: Injury Opens Door for World Champion to Compete in London Olympics Currently listed at no.1 of the Women’s World Rankings, 21 year old DING Ning will replace GUO Yan in the Chinese Team for the forthcoming London 2012 Olympic Games. The decision was confirmed by the Chinese National Olympic Committee on Wednesday 9th May 2012, the reason for the change being that GUO Yan is injured.

LI Xiaoxia and GUO Yan were the female players from China who gained entry by ranking following the GAC GROUP 2011 World Championships in Rotterdam. They occupied the respective first two places on the June list which determined the nominees. Each National Olympic Committee is permitted a maximum of two players by ranking.

Winning the Women’s Singles title at the GAC GROUP 2011 World Championships in Rotterdam did not result in DING Ning overhauling her two colleagues on the global list. She occupied the no.3 spot; thus following the withdrawal of GUO Yan, and in line with the necessary regulations, DING Ning being the next on the list, gains the London place.

It means that the team who succeeded in Beijing in 2008 is very similar to the outfit that will be on duty in London’s ExCel Arena later this year in July. GUO Yue, who qualified following her success at the recent Asian Qualification Tournament in Hong Kong, is once again on duty; she is the one member who remains from the all-conquering Chinese Team in Beijing.

Compatriots in Beijing, WANG Nan and ZHANG Yining have now retired but with GUO Yue and DING Ning in the line-up, both left handed, alongside the right handed LI Xiaoxia, there is a distinct similarity with the outfit of four years ago. Two left handers and one right hander, in 2008 it was the same; WANG Nan being left handed and ZHANG Yining right handed. Equally with the third match in a fixture being doubles, once again the Chinese Women’s Team is very strong in that department.

In 2008 WANG Nan and ZHANG Yining were the reigning Olympic and World Women’s Doubles champions. GUO Yue and LI Xiaoxia now occupy a similar status. They have not lost Women’s Doubles match since Sunday 14th September 2008, when beaten by Hong Kong’s JIANG Huajun and TIE Yana in the final of the Panasonic Open in Shanghai.

Since that date they have won a plethora of titles including gold at the World Championships in both 2009 and 2011.

Meanwhile for GUO Yan it is more pain; time and again she has been a member of the Chinese squad at World Championships but only in 2010 was she selected to play in the final.

Furthermore, in the two most recent World Championships she has disappointed. In 2009 in Yokohama she departed in round four, in 2011 in Rotterdam at the quarter-final stage; on both occasions she was beaten in four straight games by compatriot LIU Shiwen.

Sadness for GUO Yan, for DING Ning London beckons and she has the opportunity to follow in the footsteps of compatriots DENG Yaping, WANG Nan and most recently ZHANG Yining, Olympic Games gold medallist and World champion, legendary status. Photo by Remy Gros.