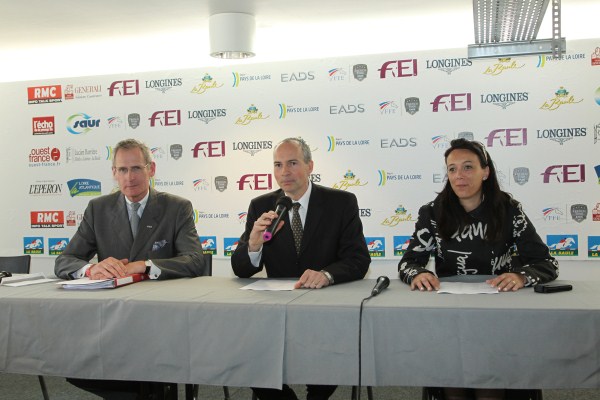 La Baule (FRA), May 10, 2012: The Swiss team will be first into the ring when the FEI Nations Cup™ 2012 series gets underway in La Baule, France tomorrow afternoon (11 May), while the host nation has drawn the coveted last-to-go spot. The draw took place this morning, and the eight competing nations will enter the arena in the following order:

The FEI Nations Cup™ celebrates 103 years of world-class team competition in 2012. La Baule has staged 24 Nations Cup events since 1970 and has traditionally been the first port of call since the Top League was established in 2003. French riders have won on their home turf on eight occasions over the last 42 years, but only twice, in 2003 and again in 2010, since the Top League format was introduced nine years ago.

Following concerns over an outbreak of equine influenza at two stud farms elsewhere in France recently, and the participation of a horse from that area at CSI Le Touquet (FRA) last week, the La Baule Organising Committee has put standard precautionary measures in place. As a result, all horses competing in the CSIO5* have been carefully checked before being allowed to enter the stables and are having their temperatures checked twice daily.

The French team manager describes his selection as “a good one….they are very talented and their horses are all on the Olympic Games – WEG long list”, he said today.

The Swiss also look strong, with Claudia Gisler (Touchable), Steve Guerdat (Nasa), Werner Muff (Kiamon) and Pius Schwizer (Carlina) all ready to line out. They fought with considerable determination to win the FEI Promotional League last season, and will be hoping to make the best possible impression on their return to the top level of this tough team tournament. Switzerland has only recorded one victory at the Francois Andre Stadium, in 2009, but it augurs well that Guerdat, Muff and Schwizer were all on that winning side.

The Irish came out on top at La Baule in 2011 and will be keen to make their presence felt again this year when they will be second into the ring. Robert Splaine’s squad is a competitive one, and includes two riders from last year’s winning foursome – Cian O’Connor (Blue Loyd) and Shane Sweetnam (Amaretto Darco) – along with Jessica Kuerten (Vincente) and Denis Lynch (Lantinus).

The British are also coming out with all guns blazing, and it would certainly boost morale if they could put on a good show just two months ahead of the London Olympic Games where the spotlight will be shining so brightly on them. Rob Hoekstra has Ben Maher (Tripple X), Peter Charles (Murka’s Vindicat W), Nick Skelton (Big Star) and Guy Williams (Depardieu vant Keizelhof) on call-up.

The Netherlands has only won twice at La Baule – in 1991 and 2000 – so the Dutch are overdue a strong performance this time around. Rob Ehrens has Albert Zoer (Sam), Leon Thijssen (Tyson), Marc Houtzager (Sterehof’s Opium) and Albert Voorn (Tobalio) in his side, and they might just pull it off.

Sweden has just returned to the Top League after winning the 2011 FEI Promotional League Final in Barcelona (ESP) last September, and brothers Jens Fredricson (Lunatic) and Peder Fredricson (H&M Artic Aurora Borealis), along with Peder’s wife Lisen Bratt-Fredricson (Matrix) and Henrik von Eckerman (Allerdings) will be determined to continue the solid run of recent form that has brought their country back to the sharp end of the sport.

France and Germany share the honours for most wins – four each – since the Top League was created in 2003, and as defending series champions, Germany will want to make the best possible start in the opening competition of the 2012 series.

At this morning’s Draw Press Conference, FEI Jumping Director, John Roche, praised the La Baule Organising Committee for staging a great event with tremendous facilities. Rémi Clero, who has succeeded the late René Pasquier as President of the La Baule OC, thanked the Saudi Equestrian Fund for providing full financial support for the 2012 FEI Nations Cup™ series ahead of a five-year title sponsorship commencing next year, once a remodelling process has been finalised.

In the light of the precautionary measures put in place this week, Mr Cléro, added “I would like to thank all the teams for their patience and cooperation. I’d like to be very clear that no sign of temperature has been detected in any horse. We are very confident the situation is under control and are looking forward to a great competition tomorrow”.

And British Chef d’Equipe, Rob Hoekstra, pointed out that “entering our team for tomorrow’s Nations Cup was not a difficult decision. Our concerns over an outbreak of equine influenza are minimal but we needed time to discuss the matter with our riders”.

So all is now ready for tomorrow’s big event and, for this season, the status quo remains – eight top nations will battle it out at eight world-class venues over 15 weeks of edge-of-the-seat action before the fate of the 2012 FEI Nations Cup™ title is decided.