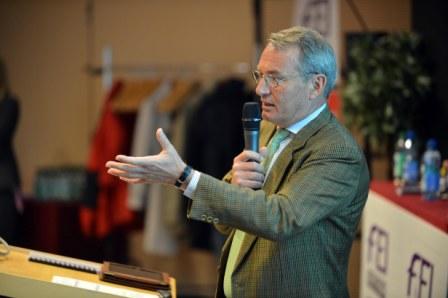 Healthy Debate, The difference between CCI and CIC competitions, qualifications and rider licences, were the key topics discussed by more than 80 delegates at the Eventing Round Table, one of two Round Table sessions held today as the final element of the FEI Sports Forum in Lausanne (SUI).

The Eventing Round Table was a follow-up to the four Open Forums that had been held in Luhmühlen (GER), Guadalajara (MEX), Adelaide (AUS) and Kihikihi (NZL), Sports Forum in the past year.

It has been agreed that there is a need to make a clear difference between CCI and CIC competitions, but also a need to reduce the intensity of effort so as to put less pressure on the horses. Two options have been put forward by the Eventing Committee – reducing the required speed on the Cross Country, or a reduction in the number of obstacles on the course.

The CIC, or short format, is viewed as preparatory training for the move up to CCI or long format competition. The collective viewpoint that has come out of the consultation process through the Open Forums is that the CCI, the compulsory format for Championships and Games, is seen as the essence of Eventing.

Roger Haller (USA) expressed the opinion that reducing the speeds in CICs was not a positive move, as horses and riders would gain more from operating at the same speed that they would have to adopt at CCIs. This was countered by Gillian Rolton, who stated that slower speeds give riders more time to prepare their horses for fences so accidents are reduced and horses are allowed to gallop in a better rhythm. “A lot of the riders are very much in support of the changes”, she said.

Mike Etherington-Smith (GBR) stated that the Event Riders Association was not in favour of slower speeds, and Ruediger Schwartz (GER) cautioned against reducing speed, as this would place more emphasis on the Dressage and Jumping phases, making the transition to long format harder.

Catrin Norinder stressed the importance of maintaining the CIC from a development perspective. “It may be seen as a training and preparatory competition for the bigger countries, but this is the sport in the smaller nations”, she said.

It was agreed that participants needed more time to evaluate the proposed changes before consensus could be reached.

Proposals to introduce rider licences and reverse qualifications were also discussed. Rider licences would be obtained after a sufficient number of qualifying results at that level that would attest a “reliable and consistent competence for that level”, but would be lost after a period with no qualifying results at the level or a series of significant discipline infringements such as dangerous riding.

Reverse qualifications for horses would be triggered by two cross-country eliminations in a 12-month rolling period, dangerous riding or fall of horse or rider. The horse would need to obtain a new Minimum Eligibility Requirement (MER) at the lower level before being eligible to compete again at the higher level.

Having fulfilled the MER does not automatically imply competence or fitness to compete at a higher level, Giuseppe della Chiesa stated. The choice if and when to upgrade a horse or rider must remain with the rider, trainer and owner under the control of the National Federation and should not become an automatic consequence of the fulfillment of MERs.

Cross Country scoring, frangible pins, and ponies were also discussed in a morning of constructive and informative debate that brought the FEI Sports Forum to a positive finish. Image © Edouard Curchod/FEI