As part of the new MLB-WBSC U-18 Baseball World Cup partnership, MLB affiliated players (born 1999-2001) are eligible to participate with their respective National Teams.

Twelve nations — Australia, Canada, Chinese Taipei, Cuba, Italy, Japan, Korea, Mexico, Netherlands, Nicaragua, South Africa and the United States — will be competing in the official junior baseball world championship, and the respective national governing bodies will have until 27 August to finalize their rosters for the U-18 Baseball World Cup.

“The National Team is intended to be a representation of a country’s best players, and together with Major League Baseball’s shared vision, the top young baseball players in the world will be able to wear their nations’ jerseys in Thunder Bay.”

“We are pleased to work with the WBSC to give our young affiliated players the opportunity to play on this international platform,” said MLB Chief Baseball Officer, Joe Torre.

“MLB remains committed to our youth all over the world and playing against the best competition in their age group will only enhance their development.

As I had the honor of doing at the World Baseball Classic, there is no greater feeling than that of representing your country on the ball field.”

“Major League Baseball continues to be a great partner in targeting youth, in evolving the culture of our sport and in building the National Team brand, which is resonating with fans and players at unprecedented levels,” said President Fraccari. 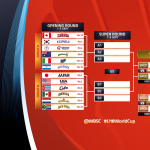