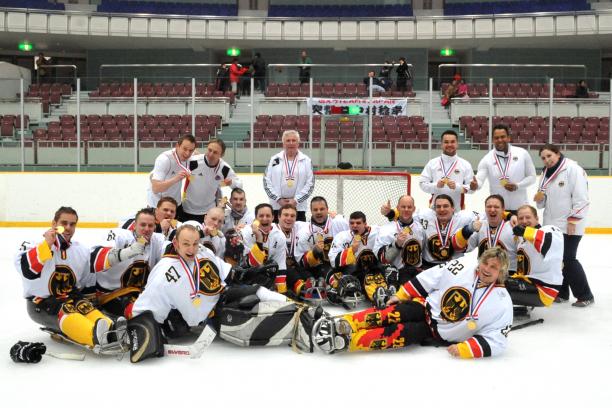 Both teams, along with Great Britain, who beat Estonia 3-2 in the bronze-medal game, will now advance to the Paralympic Qualification Tournament later this year, keeping their hopes for Sochi 2014 alive. The gold-medal game in Nagano was a back-and-forth affair that opened with a scoreless first period.

Germany’s Frank Rennhack finally started the scoring surge at the 8:00 mark in the second frame off an assist from Bernhard Hering, and then his teammate Bas Disveld netted a goal off a pass from Hering nearly four minutes later.

Down 2-0 heading into the final period, Japan’s Satoru Sudo scored unassisted, but then Rennhack fired one back on the other side on a power play to keep Germany up 3-1. Kazuhiro Takahashi would then score for Japan, but Germany was able to hold onto their lead and claim the gold.

Germany outshot Japan 25-7 in the game, as Simon Kunst recorded five saves for the winning side and the host nation’s Mitsuru Nagase had 22 saves.

In the bronze-medal contest, Great Britain’s Tyler Christopher opened the scoring at the 13:58 mark in the first period, finding the net off an assist from Matthew Clarkson and Ian Warner on a power play. Gary Farmer then scored two goals early in the second period – both assisted by Clarkson – to give Great Britain a quick 3-0 edge.

Despite goals from Rasmus Penno and Kaido Kalm for Estonia shortly after, Great Britain would hold on to win the game. British goalie Robin Gaze recorded 17 saves on the day, while Estonia’s Urmo Voogla saved six of the pucks that came his way.

Japan’s Takahashi was named best forward at the Championships and the host nation’s Satoru Sudo was named best defenseman, while Poland’s Andrzej Mylnarczyk was picked as the best goalkeeper.

Takahashi led all players with eight goals and an assist in the tournament, while Satoru had four goals and four assists. Mylnarczyk recorded an 82 per cent save percentage during the Championships with 105 saves. —- IPC/Picture © Moto Yoshimura