Home  »  MARTIAL ARTS   »   Marius to Run for the SportAccord Presidency 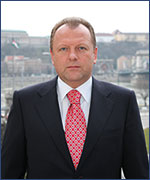 Mar 15, 2013: On March 13th, 2013, the General Secretary of the International Judo Federation, Mr. Jean-Luc ROUGE, sent the nomination of Mr. Marius L. VIZER, the IJF President, for the position of SportAccord President at the next elections to be held in St-Petersburg in May on the occasion of the SportAccord Convention.

In compliance with Article 31 of the SportAccord Statutes, Mr. VIZER has been sitting on the Executive Committee of the IJF since 2007 as the President of the organization, and also already served a full term on the IJF Executive Committee from 2000-2007 as Vice-President.

A Lifetime Dedicated to Sport

Having dedicated his lifetime to Sport, a career built in the spirit of Judo and in the light of its principles, Mr. Marius Vizer, who was a judo athlete, then an educator and a coach, before successively becoming the president of the Romanian National Judo Federation, the European Judo Union President and then the IJF President, will propose a new vision and strategy for the SportAccord organization: “My objective is to transform SportAccord into an efficient and lucrative organization, that preserves the interest of International Federations, Continental Unions and National Federations in all sports, working in convergence with and supporting the Olympic Movement”, declared Mr. Vizer.

More Visibility to All the Sports

Knowing that “The entire society is moving towards globalization”, the IJF President is proposing that the path of SportAccord should follow this trend: “we should give more visibility to all the sports, under a unified global marketing and media strategy. At the same time it would generate important financial resources for the benefit of the International and National Federations.”

Support System and Sport for All Program

Other important ideas to promote sports development throughout the world will be proposed by Mr. Vizer to the delegates of the SportAccord convention in May: “An important support system that SportAccord can provide to its members is access to a knowledge base, containing standardized practices for an efficient management of the IF activity in all fields such as their member-management, event organization, marketing, media, sponsorship, communication. Additionally, it is important to create a Sport for All programs, in support of the development of all SportAccord members, that would give the opportunity of enjoying all the sports, to youth and people around the world, regardless of their social or economic background.”

Among the achievements of international judo, under the leadership of Mr. Vizer, are:

• Creation of the World Judo Tour starting in 2009 (a series of annual competitions consisting today of 10 Grand Prix, 4 Grand Slams and at the end of each season the World Masters),

• Organization of the World Championships every year,

• Implementation of a new brand and image of the International Judo and of the IJF,

• Development and implementation of a new marketing strategy which increased the global visibility of Judo,

• Establishment of relations with major international broadcasters to the extent that the 2011 World Championship was broadcasted to over 130 territories,

• New strong sponsors to Judo which allowed many development projects to be undertaken and over US$ 2 million of donations per year to be granted,

• Development of a strong social dimension for judo by establishing Judo for Peace and Judo for Children programs,

• Modernization of the judo rules,

• Working towards evolving Judo into a mass sport

As a motto for his candidature, Mr. Vizer declared: “I want to support SportAccord to evolve into a world-renowned organization that will support the engine of the sport in a very clear and transparent way. Through new activities and programs, SportAccord must support all International Federations, Continental Unions and National Federations.” —- IJF

View all posts by: Abdul Rahim
2 Responses to “Marius to Run for the SportAccord Presidency”