Home  »  OTHER SPORTS   »   Winners of IHF Photo of the Year Contest 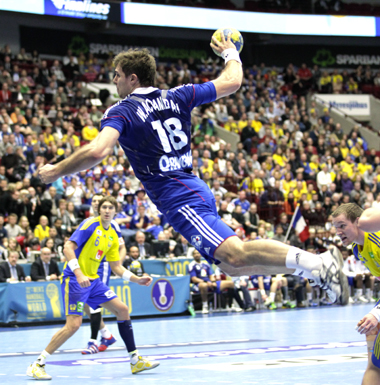 Lausanne – Switzerland, Oct 11, 2012: It might be a coincidence, but both handball players, photographed by the winners of the IHF Photo of the Year Contest, are not only flying while being photographed, but later-on jumped twice on the winners’ podium: Both Norwegian Heidi Löke and French William Accambray were world champions in 2011 and Olympic champions in 2012.

And the pictures of them taken by German photographer Michael Heuberger and French Stephane Pillaud were elected IHF Photos of the Year 2011. For Pillaud it was the second victory in this annual competition, after he had already been among the winners of the 2009 edition. Both winners will be handed over a cheque worth CHF 2500.- each.

An IHF expert jury did not have an easy decision to sort out the winners from all those pictures that photographers from all over the world had submitted for this contest. Finally they voted for flying Heidi Löke in the 2011 World Championship match against Montenegro in Santos, Brazil. Every muscle of Löke’s arm is contracted while shooting, flying parallel to the ground. And Löke herself likes this picture, as she mentioned during the ceremony in Herning, when she was awarded World Handball Player of the Year – so later-on world and Olympic champion Löke was something like a lucky charm for German handball photographer legend Michael Heuberger.

Pillaud’s winning picture was taken in the 2011 World Championship semi-final France vs. Sweden in Malmö and shows all the power of youngster William Accambray, flying through the Swedish defence like a knife through warm butter. Accambray scored, France proceeded to the final and won the title after extra-time against Denmark in one of the most remarkable final matches ever.

The International Handball Federation conveys its congratulations to both winners! —- IHF

German and French Winners of IHF Photo of the Year Contest