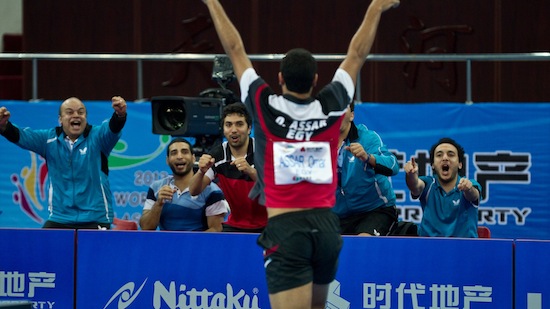 Guangzhou – China, Mar 29, 2013: Australia, Brazil and Egypt have stunned the table tennis world by beating their more fancied opponents and progressing to the quarter-finals of the Times Property 2013 World Team Classic in Guangzhou, China.

These spectacular results means that for the first time in this event’s history, Oceania, South America and Africa will be represented in the quarter-finals, indicating the growth of table tennis in these continents on the back of ITTF’s development efforts.

In a match that lasted 3.5 hours, the Australian women completed the first upset of the day, shocking their higher ranked opponents Poland to gain their quarter-final berth.

Zhenhua DEDERKO got Australia off to a great start winning her match against the superstar Natalia PARTYKA. The ecstatic Australian said after the match: “I didn’t feel any pressure at all as I knew she was a great player, so I just went out there and tried my best.”

39 year old Jian Fang LAY, who won the deciding match to create history, said: “Katarzyna GRZYBOWSKA had all the experience, but I knew when it goes to a 5th game, anything can happen and it did!”

Once the Australians secured their quarter-final berth, all eyes turned to the Egyptians Men’s titanic struggle with the heavy favorites Singapore.

Singapore had looked to have the match won, being up 2-1 and having two match points. However the heroic Ahmed SALEH saved the match points and held his nerve to tie up the fixture at two-all. Omar ASSAR then made no mistake in the final match winning 3-0 to complete a famous victory over their Asian rivals.

An ecstatic Egyptian coach Maged ASHOUR stated: “I think this is the finest moment for Egyptian table tennis. In the past we have come close, but never managed to get the win. In the last match, I was very pleased with the performance of Omar ASSAR as he had to play with a lot of pressure and he delivered. I couldn’t be prouder.”

Gaining confidence from the Australian and Egyptian teams, the Brazilian Men set out on the mission impossible, which was beating European powerhouse Sweden.

Like the Egyptians, Brazil faced match points against Sweden, who went into the match thinking that it would be a regulation victory.

Brazilian Cazuo MATSUMOTO showed impressive form during the match winning both his matches, including a crucial victory over Mattias KARLSSON in the 4th match. Gustavo TSUBOI was the man of the hour, saving two match points to win a classic match against Jens LUNDQVIST, which sent the Brazilian team into hysterics.

MATSUMOTO, who was nearly in tears while being interviewed said: “This is the greatest day for Brazil, I simply do not know what to say.”

The Australian Women’s team will be joined by Singapore, Netherlands, China, Germany, Korea, Hong Kong and Japan in the quarter-finals.

Egypt and Brazil will be joined in the Men’s quarter-finals by Germany, Chinese Taipei, China, Japan, Korea and Austria. —- ITTF/ Photo: Xi Peng