Lausanne (SUI), April 26, 2012: FIG Age Group Programme, The last of the four planned events to introduce the FIG Age Group Project to developing gymnastics countries was hosted on April 17-19, 2012, at the magnificent facilities of the Academy for Sports Excellence (ASPIRE) in Doha, Qatar. These four were held with the funding support of the IOC so that each invited federation could send one MAG and one WAG coach. An additional such camp was held in January in South Africa and was funded by the FIG with its Development Fund for Continental Unions. 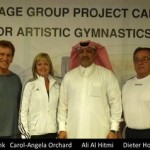 This time, a total of 21 coaches from 10 FIG member federations attended. The participating countries were Bangladesh, Iraq, Jordan, Kingdom of Saudi Arabia, Lebanon, Nepal, Pakistan, Palestine, Qatar and Yemen.As reported in the past, the Age Group programme includes a testing and monitoring programme for MAG and WAG physical abilities and technical skills as well as a complete multi-level competition programme with modified rules for age-group gymnasts and compulsory exercises for all ages. It also includes a variety of additional information related to developing a systematic gymnastics programme that can lead to high performance. The testing programme was developed by well-known coach and clinician Dieter Hofmann and the competition programme by Hardy Fink, the Director of Education and Academy Programmes and, for the choreographic and artistic elements, by many time World and Olympic-coach and consultant to the British Team, Carol Angela Orchard.

These three once again served as the FIG experts for this course having come directly from the same course in Senegal. Hardy Fink served as course leader. Each of them presented different components of the age group project and presented additional theory and practical lectures related to artistry, gymnastics systems, long term athlete development, issues related to intense training of young gymnasts, biomechanics, and strength and flexibility training to enhance the understanding and education of the participating coaches.

Qatar, now into its eleventh year as a gymnastics federation, hosted this event with its usual enthusiasm and expertise. The facility was magnificent and all additional technical training aids and audio-visual equipment were provided. Ten gymnasts – five boys and five girls – were continuously available and several of the national team members trained in the background and assisted as demonstrators whenever needed. Congratulations and thanks go again to Ali AL HITMI, the President of the Qatar Gymnastics Federation who visited the course daily and to Anis SAOUD, the Technical Director, who worked in advance and during this introductory camp to assure its success.

The participating federations will now study the components of this new project offered by the FIG with their federation leaders and decide if they wish to adopt and implement it within their countries and regions. If the decision is positive, then each federation will be offered an annual monitoring and updating camp in their own countries so that more coaches and gymnasts can be exposed to the information and their progress monitored by FIG experts.

The FIG Age Group Project for MAG and WAG has now been introduced at five locations (Malaysia, Guatemala, South Africa, Sénégal, and Qatar) with the official attendance of 118 coaches from 32 developing gymnastics federations listed here in alphabetical order:

In addition, because of the nationality of some of the coaches of the demonstrator gymnasts in the host countries, citizens of Belgium, Bulgaria, China, Egypt, France, Portugal, Syria, Tunisia and Ukraine also had the opportunity to be informed. The experts have come from Australia, Canada, Germany and Great Britain.

In the coming weeks, the FIG will seek commitments from the federations and hope for continued IOC support to provide for the next phase of full implementation by the federations and annual monitoring and support and education by FIG experts. The programme will remain over 95% as introduced, but some minor corrections and additions will be made over the summer based on the experiences gained from the five introductory training camps. Image © FIG