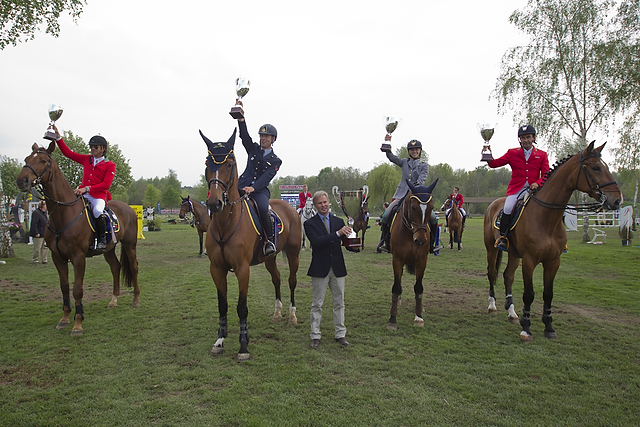 Lausanne (SUI), May 05, 2012: Lummen in Belgium played host to the opening leg of the 2012 FEI Nations Cup™ Promotional League European series today (4 May), and it was the Italian team who came out on top in the tough 14-nation contest.

A total of nine countries went through to the second round, with Belgium and Canada sharing the lead carrying just four faults each at the halfway stage, while Italy, Germany, Mexico, Spain and Switzerland carried eight and Denmark carried 14. But as the leaders faltered, the Italians stood firm, and it was second-round clears from Juan Carlos Garcia (Bonzai van de Warande), Francesca Capponi (Stallone) and Natale Chiaudani (Almero 12) that clinched it for Stefano Scaccabarozzi’s side that also included Luca Marziani (Wivina).

The FEI Promotional League embraces three separate series, and the European circuit includes five fixtures with the next taking place in Linz-Ebelsberg, Austria next week followed by Copenhagen, Denmark later in the month and Drammen in Norway in June. These events are all rated 4-Star, but the last show in this league is the CSIO 5-Star at Gijon, Spain which will be staged in early September.

The Challengers League series visits Minsk in Belarus, Bojourishte in Bulgaria and Lisbon in Portugal during the month of May before moving on to Drammen in Norway and Riga in Latvia in June. Sopot in Poland is the venue in early July followed by Budapest in Hungary and then Bratislava in Slovakia, while the last two legs will be held in Vazgaikiemis, Lithuania and in Moscow, Russia, the latter staging the only 5-Star CSIO in this league at the end of August.

DRAWS TO A CLOSE

There are four events in the North and South American League which draws to a close this weekend at CSIO 4-Star Porto Alegre, Brazil following rounds at CSIO 5-Star Calgary, Canada last September, CSIO 2-Star in Buenos Aires, Argentina in November and CSIO 4-Star in Wellington, USA in March. Canada is well out in front on the leaderboard after gaining maximum points at all three events to date, while the USA lies second ahead of Mexico in third.

Once again, Barcelona will host the FEI Nations Cup™ Promotional League Final at the popular 5-Star Spanish fixture which takes place from 13 to 16 September 2012.