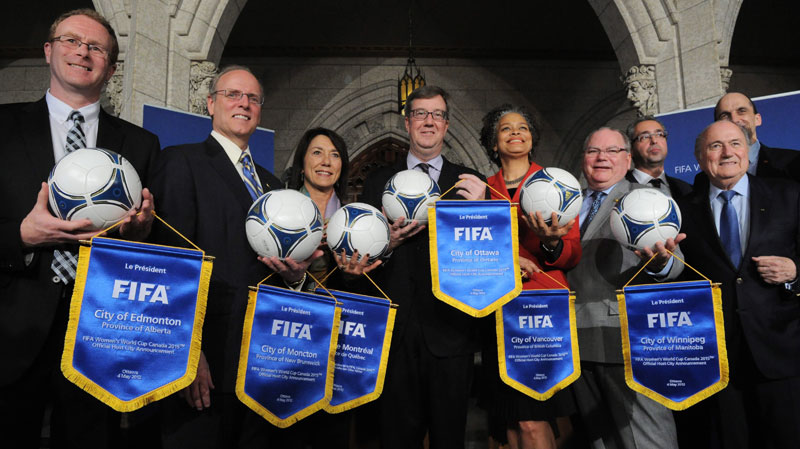 Ottawa-Canada, May 04, 2012: The official Host Cities for the FIFA Womens World Cup Canada 2015™ were announced at a media conference held on Parliament Hill in Ottawa, Canada on 4 May 2012 in the presence of the Honourable Bal Gosal, Minister of State (Sport), FIFA President Joseph S. Blatter and Canadian Soccer Association President Dr Dominique Maestracci.

The FIFA Women’s World Cup – the largest single sports event for women in the world – will be the first single sport event in Canada to be held from coast to coast.

“As Minister of State for Sport and an avid soccer fan, it is with great excitement that I congratulate the official Host Cities of the 2015 FIFA Women’s World Cup,” said the Honourable Bal Gosal, Minister of State (Sport). “The Government of Canada is proud to be a key supporter in the hosting of this prestigious event, which will provide Canadians across our country with the chance to experience the highest level of soccer competition in their own backyards. We look forward to cheering on our women’s national team as they compete against the world’s best.”

“Canada 2015 has already made history as this will be the first FIFA Women’s World Cup in which 24 national teams will participate. Women’s football is continuing to mature, and I am really pleased that football fans in cities across the country, from east to west, will have the opportunity to take part. The Host Cities play a crucial role in delivering a FIFA competition, and I am sure that seeing world-class footballers across Canada will inspire a whole new generation of girls and women to get involved in the game.”

“We are extremely grateful to FIFA for providing us with the opportunity to host this most important competition,” commented Canadian Soccer Association President, Dr Dominique Maestracci. He added that “the sport of soccer continues to gain momentum both as a participatory and spectator experience in our country, with nearly half of all participants female. We thank the Government of Canada and our provincial and municipal government partners for their outstanding support to ensure we will continue that growth through 2015 and beyond.”