Home  »  OTHER SPORTS   »   FEI and IEOA sign a Memorandum of Understanding 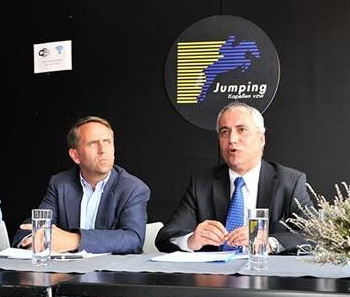 Lausanne, August 9, 2013: The International Equestrian Organisers Alliance (IEOA) has become the first of the former FEI Associate Members to sign a Memorandum of Understanding (MOU) with the FEI, following the removal of the Associate Member status from the FEI Statutes at the 2012 FEI General Assembly. The MOU, which was signed by IEOA President Peter Bollen and FEI Secretary General Ingmar De Vos, formally acknowledges the IEOA as an organisation recognised by the FEI.

The IEOA is the umbrella organisation for international organisers in Jumping, Dressage, Eventing and Driving, and is in the process of becoming the representative body for event organisers in all seven of the FEI disciplines.

“We are very happy to formalise our relationship with an important organisation such as the IEOA,” said FEI Secretary General Ingmar De Vos, who signed the MOU on behalf of the FEI. “We have entered this significant agreement in the spirit of cooperation, respect, and transparency. Event organisers are essential to our sport and we are confident that the MOU is a good basis for a dynamic working relationship.”

“The IEOA is very pleased with the MOU,” IEOA President Peter Bollen commented. “We had concerns following the removal of the FEI Associate Member status but the new process has given us the opportunity to be heard and to establish a much more direct and constructive relationship with the FEI, which is extremely important to us as an organisation.”

The FEI is currently negotiating MOUs with seven other stakeholders. —- FEI/Photo © gallop.be