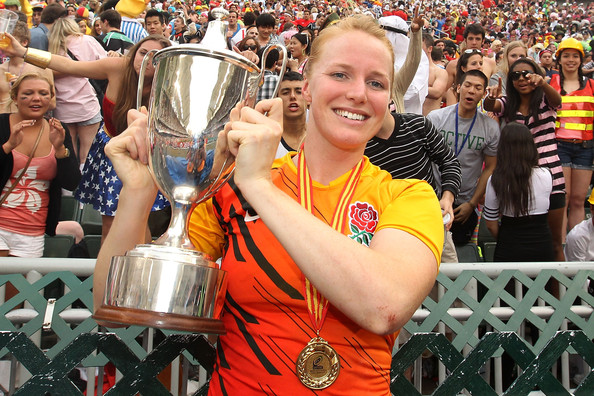 Dublin – Ireland, Dec 2: England’s Michaela Staniford has today been named IRB Women’s Player of the Year, the prestigious Award that recognises excellence on the field of play.

Staniford was presented with the Award by RFU Chairman and IRB Council Member Bill Beaumont following England’s 32-23 victory over New Zealand at Twickenham on Saturday, a win which secured a historic 3-0 series whitewash of the world champion Black Ferns by the home team.

The achievement caps a stellar year for the versatile 25-year old wing who has impressed playing for her country at the very highest level in both Fifteens and Sevens.

On receiving the Award, Staniford said: “I am delighted to be receiving this prestigious award, which is as much a reflection of the achievements of the England Sevens and Fifteens squads in 2012 as it is of my own personal journey. To receive this award in front of our home fans at Twickenham after a Series victory against New Zealand, is really, really special. It caps a wonderful year.”

Beaumont added: “I have been following the development and growth of Women’s Rugby with great interest. It is fitting that Staniford should receive this award in front of a large crowd at Twickenham after starring in a gripping, high-quality Rugby match.”

“The occasion is a mark of how far the Women’s Game has come in a relatively short period and points to a very bright, very exciting future.”

IRB Chairman Bernard Lapasset said: “Women’s Rugby is going from strength to strength around the world and the high standard of international competition makes the IRB Women’s Player of the Year award exceptionally competitive.”

“Michaela has consistently demonstrated on the world’s biggest stages with England in Fifteens and Sevens that she is a stand-out performer and thoroughly deserves this prestigious award.”

“The Women’s Game has been elevated to unprecedented heights and the IRB is committed to ensuring that more women and girls across more countries around the world have the ability to get involved in Rugby at all levels.”

Staniford’s award comes on the same day that New Zealand claimed the Dubai crown in the inaugural IRB Women’s Sevens World Series. It is the first time that Women’s Rugby has had its own official international Series and is a major landmark in the development of the Women’s Game.