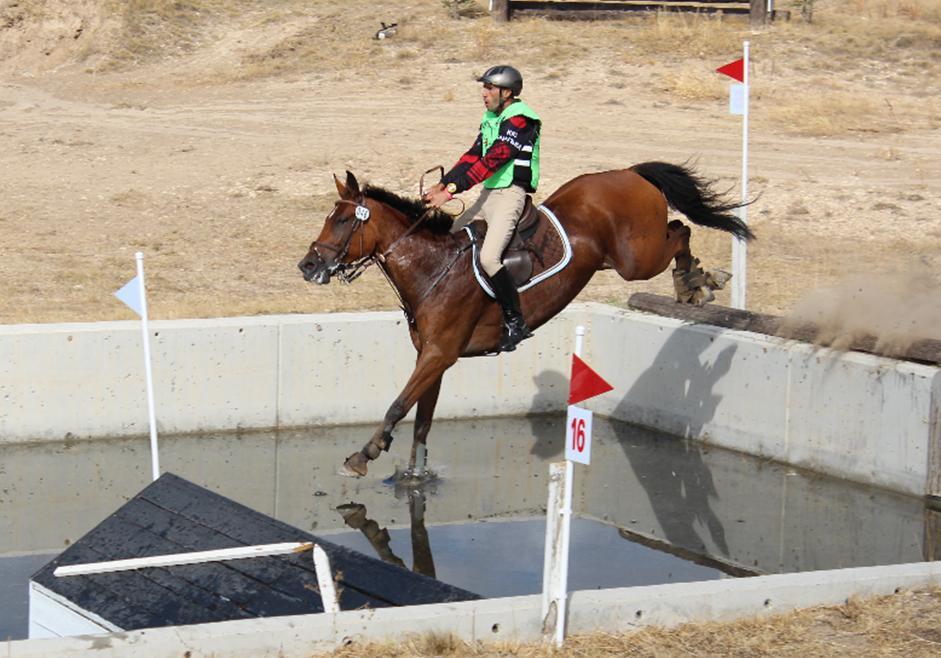 Eskisehir – Turkey, Oct 04, 2012: Bulgaria’s Ivan Dobrev claimed individual gold at the FEI Balkan Eventing Championships 2012 staged at Eskisehir, Turkey from 21-23 September. The city of Eskisehir lies in the heart of the Anatolian region, and over 200 miles to the south-east of Turkish capital city of Istanbul. Competitors from three nations – Bulgaria, Romania and Turkey – battled it out for the honours, and each country took home a medal.

Silver went to the host nation’s Simge Ozaltindere and bronze was claimed by Romania’s Calin Nemes, while Bulgaria’s Todor Korov and Miroslav Iliev finished just outside the medal placings.

The Bulgarians took a firm grip on the lead when filling the top three places after the Dressage phase. Dobrev’s score of 53.44 with Nikita left him just ahead of Nemes and Zambo, who earned a mark of 55, while Iliev was next best with 58.44 partnering Rustic de Santana.

Cross Country day was exciting, with a technical but safe and fair track created by the premier French course designer Pierre Michelet. Simge Ozaltindere, who failed to complete the Cross Country phase at the 2011 Balkan Eventing Championships at Shumen in Bulgaria, described the course as “really exciting and challenging”.

The Turkish rider was full of praise for the challenge created by Michelet. “I’ve been an eventing rider for a long time and have competed on the European circuit”, the 23-year-old said. “I cannot say the fences were very big and bold but some lines and fences required concentration. I am also excited to see that the course develops within itself towards the end, and I think it is a ‘teaching’ course as well.”

Only three riders completed the Cross Country track within the time allowed. One horse-and-rider combination was eliminated – the 2011 individual gold medal winning partnership of Bogdan Milascon and Lady Kera from Romania.

Dobrev and fellow-Bulgarian Todor joined Ozaltindere on a clean sheet and horses looked fit and well after their run over the fixed fences. The highly-experienced President of the Ground Jury, Turkish National Federation Secretary General Mr Ali Kucuk, kept a watchful eye on proceedings along with the other principal officials and veterinary experts.

On the morning of the final Jumping phase, 28-year-old Dobrev held a comfortable lead, but the next three on the leaderboard had to battle it out for the silver medal.

The addition of 12 faults put paid to the chances of Bulgaria’s Miroslav Iliev and, despite leaving one fence on the floor, Dobrev clinched a clear victory ahead of Ozaltindere who finished on her Dressage mark, while Nemes had to settle for the bronze after picking up six penalties in the Jumping.

Ground Jury President Mr Kuckuk described the event as “a landmark for us.” He pointed out that “the highly qualified officials appointed by the FEI have shown that even the competitions themselves can be a tool of development. We are here together with names like Pierre Michelet, Luciano Cantini, Andrew Fell, Rafal Przedelspski and so on. All have involved themselves with the effort to improve organisation, smoother operation and a safer and healthier environment for our horses.”

“I think all riders and organisers benefit from what has happened here, because these people were not involved just as officials but also as guides, with precious advice, comments and discussions with riders. I’d like to thank the FEI Eventing Committee for providing us the chance to work with such people, and we hope to be more of an eventing centre for our region over the coming years.”