Home  »  OTHER SPORTS   »   Christoph is the new Single Driving Champion 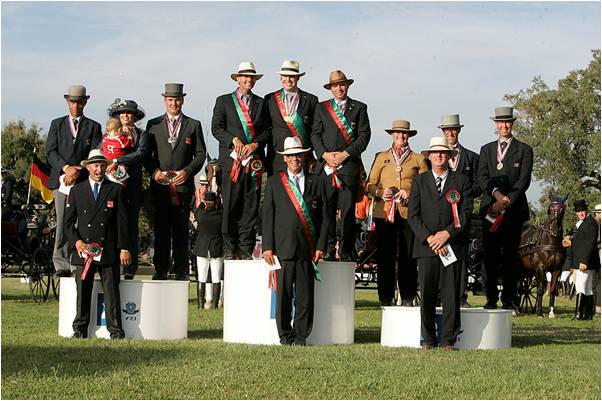 Companhia das Lezirias, Porto Alto (POR), Sept 16, 2012: Christoph Dieker (GER) has won the FEI World Single Driving Championships at Companhia das Lezirias, Portugal. Dieker came second in the dressage, stayed on silver after the marathon and only had one fault in the final obstacle driving competition. Bartolomiej Kwiatek (POL) was on gold before the cones, but sadly made too many faults and not only gave away individual gold, but also team bronze. Michael Barbey (SUI) won the silver individual medal; the bronze medal went to Wilbrord van den Broek (NED). The German team successfully defended their gold medal. The team silver was won by Switzerland and the bronze team medal was awarded to the Netherlands.

The wonderful site of Companhia das Lezirias has been hosting national driving competitions since 2000 and the Portuguese organizers were very proud to welcome 73 competitors from 20 nations at the very comfortable and well laid out competition site. Despite the hot weather conditions, the temperature on marathon day even raised to 40° Celsius, the competitions were run according to plan and all necessary precautions were taken to ensure the welfare of the participating horses. The competitors and spectators were treated to eight wonderful obstacles, designed by O-course designer Richard Nicoll (USA), who was amongst others also responsible for the courses at the first World Single Championships in Ebbs 1998 and in Astorp 2004. Nicoll received many compliments from the drivers for his challenging, but fair design.

From gold to empty hands

Bartolomiej Kwiatek defended the silver medal he won with Lokan at the previous World Championships in Pratoni del Vivaro (ITA) in 2010 and made his first move towards a new medal in the dressage. Driving his 11-year old Silesian stallion Lokan, ‘Bartek’ put down his best performance ever. “I am the happiest person in the world,” said Kwiatek. “Lokan is just an incredible horse and I believe the key to our success is the good relationship that we have. I was afraid that I had not trained him enough and that I would not have the right feeling, but it all came together perfectly.”

Although the combination did not drive a very fast marathon, they were able to keep their lead in the standings: “Lokan is a black horse and a heavy horse, so the heat was a disadvantage to us,” said Kwiatek. “Despite some hickups in obstacle six, I am quite happy with our performance.”

The 30-year old professional driver and horse trainer lost it all in the tricky cones course, where the allowed time was the decisive factor. Being the last starter in the course, he was a little over five penalty points ahead of Dieker, who had secured his silver. Kwiatek was unable to deal with the pressure and knocked four balls down, which dropped him to the fourth place.

German team member Christoph Dieker was one of the first drivers who drove dressage on the first day. Dieker received a score of 39,55 for his test with the 17-year-old FST Elmor. Dieker felt that he had been lucky with the points: “This definitely was not my best test ever with this horse. I have been lucky.” Dieker and Elmor have been a combination for seven years and have competed in the World Championships in 2008 and 2010. The World Championships in Portugal is the last Championships for Elmor.

In the marathon, Dieker missed a gate in obstacle 4, which cost him precious seconds. But the 30-year old salesman finished just behind Kwiatek and kept his second position in the standings. Dieker decided to go for it in the cones course: “Elmor was very motivated and I just decided to see what would happen. I nearly tipped over when I went from 14 to 15! I have been the lucky boy today, I can’t describe the feeling, but I am totally happy!”

Michael Barbey (SUI) set his first step towards a medal in the marathon, which he won, driving his 13-year-old KWPN gelding Solo V. Barbey came third in the marathon at the World Championships in Jarantow 2008, second in Pratoni 2010 and he was now finally able to grab the first place in the marathon at Lezirias: “It was like Solo had been walking the obstacles with me in the past days, he knew exactly where I wanted to go,” said 29-year-old Barbey. “It all went according to plan and I did not make any changes in my routes. I deliberately took longer routes in the obstacles so I could keep on driving and not make it heavier than necessary for my horse.” Barbey has had Solo V for seven years and Lezirias is their second World Championships. Barbey was in seventh position before the cones and honoured the Swiss precision. He passed the finish line with only 3,29 penalty points for exceeding the time allowed, which would move him up to the silver medal as none of his fellow competitors managed to stay clear: “I wanted to do well in the cones and move up a few places, at least to the bronze position. I never expected that I would win silver,” said Barbey. “The course was fluent enough for my horse, I kept him calm until gate 7 and then we just went for it.”

Wilbrord van den Broek was very happy with his bronze medal, which he thanked to the 16-year-old Oscar, the horse with which his father Jan won the gold medal in 2008. Van den Broek came third in the dressage: “It went really well for us. I did not make any mistakes. It could have been a bit better here and there and the test could have been more sparking, but I did not want to take any risks.” Van den Broek has been competing with Oscar since 2010 and was a groom for his father when he drove the KWPN gelding at the previous World Championships. Lezirias was the first World Championships for Wilbrord van den Broek.

The Germans proofed their strength again in the team competition. Detlef Bohlmann, Christoph Dieker and Dieter Lauterbach took the lead after the dressage and maintained this comfortable position throughout the whole competition. The Netherlands was on silver before the cones and dropped to bronze when the Swiss put down excellent performances in the cones competition. The Polish drivers lost bronze when Bartolomiej Kwiatek made four faults.

View all posts by: Abdul Rahim
One Response to “Christoph is the new Single Driving Champion”