With the Liebherr 2017 World Table Tennis Championships less than 50 days away, the Seamaster 2017 ITTF-Asian Championships is one of the last events for Asia’s top teams to battle it out ahead of the world’s biggest table tennis stage. 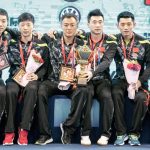 In his match against Korea’s rising star JANG Woojin, Grand Slam Champion MA Long (CHN) was pushed to his limits to win his game. The reigning World Champion eventually proved too strong for the JANG, taking the match in four games (14-12, 4-11, 12-10, 11-3).

On the team’s 21st Gold in the Men’s team event, FAN shared “We were fully prepared for any difficulties during the match under the guidance of Coach Qin. We have thought what difficulties we might face as well as how we should tackle it. I want to thank our coaching team for their trust in me to put me in the first playing position.”

“Today in my first and third game, Lee Sangsu played the first few points well, and that gave me pressure, I had to come back from behind to win both game. I think our team did well overall. I hope that I will play well for the individual events as well, and have good results in the last event before the World Championships, and continue my performance into the World Championships in Dusseldorf.”

The day before, the Chinese Women’s Team line up of DING Ning, LIU Shiwen and ZHU Yuling proved why they are the top three female players in the World, defeating Japan 3-0 to claim the Women’s Team Gold.

LIU had to fend off the tough challenge posed by Miu HIRANO (JPN), who became the youngest ITTF World Cup Champion ever when she won the Seamaster 2016 ITTF Women’s World Cup last year in Philadelphia, USA. The duo exchanged rapid rallies and exciting shots throughout the match that thrilled the local crowd before LIU finally overcame HIRANO 3-1 (11-3, 9-11, 11-8, 11-9) to secure the first point for China.

LIU stated “Miu Hirano has improved significantly over the past year, and a very strong competitor. After winning the first game, I lost focus and was too eager for victory when leading at 8-5 in the second game, and that costed me that game. The scores were very tight after that as well, but this match also let me know my opponent better, it’s a better situation for preparing for future major events.”

The Seamaster 2017 ITTF-Asian Championships continues with 5 more Gold medals for the individual events up for grabs, Mixed Doubles on 14 April, Women’s Singles & Men’s Doubles on 15 April, and the Men’s Singles as well as the Women’s Doubles final on 16 April 2017. —- ITTF