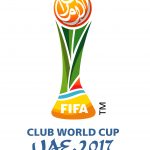 The event marks an important milestone in the journey towards the start of the 14th edition of the FIFA Club World Cup, which runs from 6 to 16 December.

The unique and very recognisable FIFA Club World Cup trophy shape was used as a starting point for the Official Emblem. The design draws inspiration from the UAE’s rich history, heritage and culture.

The iconic ball, created from Arabic calligraphy meaning Emirates, features at the top of the emblem, and depicts a unifying force synonymous with the nation’s passion for the beautiful game.

Speaking at the emblem launch, His Excellency Major General Mohamed Khalfan Al Romaithi, chairman of the Local Organising Committee for the FIFA Club World Cup UAE 2017 explained: “The Official Emblem is a true representation of the UAE’s cultural heritage.

The beautiful multi-coloured sands of the desert form the basis of the emblem. From our precious historical traditions of fishing, sailing and pearl diving, reflected in the representation of the dhow, to the rich beauty of date palm leaves and trees that signify sustainability, this is a symbol for a phenomenal tournament taking place in the UAE.”

The opening match will take place in Al Ain on 6 December and will see the domestic club champions of the host nation take on the champions of Oceania.

“Football is the leading sport in the UAE and you could clearly see the people’s passion for the sport at the 2009 and 2010 editions hosted here,” said FIFA Chief Competitions & Events Officer Colin Smith during the unveiling ceremony.

“The warm hospitality, love of the game and the success of the tournament are some of the strongest drivers behind bringing the FIFA Club World Cup back to the UAE for the two next editions.”

We are embarking on one of the most significant journeys in the world of football with some of the best international tournaments gracing the shores of Abu Dhabi in the next three years,” said His Excellency Aref Al Awani, Tournament Director of the Local Organising Committee for the FIFA Club World Cup UAE 2017.

“Such world-renowned tournaments not only draw in thousands of fans from around the world but also help us in sustaining the UAE’s football legacy and developing the next generation of sporting stars.”

Tickets on sale soon
To celebrate yet another sensational milestone, ticket sales will be launched in the coming weeks on FIFA.com and fans can pre-register here. —- FIFA