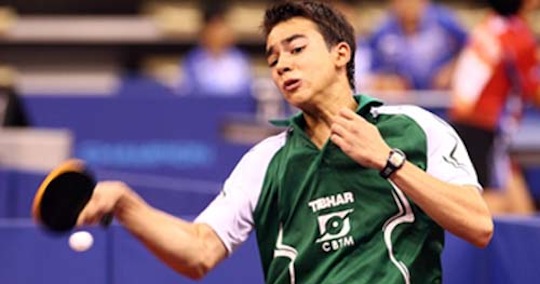 The appearance in Buenos Aires was the fourth for Hugo CALDERANO on the ITTF Junior Circuit in 2012. Earlier in the year he competed in the Czech Republic, Sweden and Italy; reaching the latter stages in all three tournaments. Equally, there is progress for Eric JOUTI, the player Hugo CALDERANO beat in the final in Buenos Aires. He appears in ninth place on the Standings; like Hugo CALDERANO, he competed in Europe earlier in the year and gave a series of fine performances.

A place in the top ten is the goal to be assured of an invitation to the ITTF Junior Circuit Finals at the conclusion of the programme of tournaments. A total of 16 players are invited with the proviso that there is a limit of two players from an one national association, one player from the host nation is present and each of the six continents affiliated to the International Table Tennis Federation is represented.

In addition players must have competed in two continents; both Hugo CALDERANO and Eric JOUTI have met all the stipulations.

The same criteria for qualification exists in the Junior Girls’ Singles Standings where once again Brazil is very much to the fore. Caroline KUMAHARA enters the race in tenth place with 1,000 points, following her victory in Buenos Aires.

The 16 year old did not join her male counterparts on the European tour earlier in the year; she remained in Brazil to compete in the Latin American Olympic Qualification Tournament. Certainly the decision proved a wise move; Caroline KUMAHARA duly qualified and will be in action at the London 2012 Olympic Games.

LI Ching Wan (Hong Kong) is in seventh place ahead of Laura PFEFFER (France). Dina MESHREF (Egypt) is in ninth place, followed by Caroline KUMAHARA (Brazil). Earlier this month Omar BEDAIR (Egypt) and Dina MESHREF (Egypt) were the respective winners on the ITTF Junior Circuit in Algeria; whilst one week ago Konrad KULPA (Poland) and Carelyn CORDERO (Puerto Rico) won in Malta.

Photo by An Sung Ho.