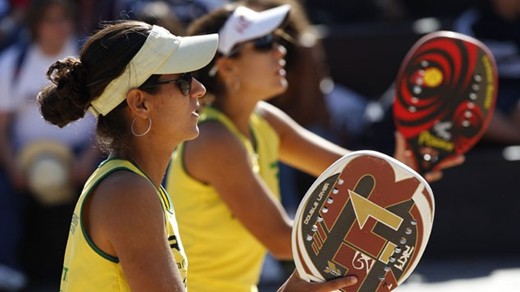 London – UK, June 18, 2012: The fourth edition of the ITF Beach Tennis World Championships gets under way this week at Burgas Beach in Bulgaria. The tournament runs from Thursday to Sunday (21-24 June).

This season signals the first time the World Championships are being played outside of Italy. For the past three years, the tournament has always been held at the Foro Italico in Rome.

The men’s and women’s doubles events both have a 32 draw. The acceptance lists were confirmed earlier this month with players from 15 countries taking part, and the wildcards have since been awarded to complete the line-ups.

The reigning men’s champions, Alessandro Calbucci and Luca Meliconi, will return to defend the title they won for the first time together in 2011. The Italian duo have already teamed up successfully once this year by winning the Grade 3 event in Misano Adriatico, while Calbucci has added another three titles with Andrea Penza.

Meliconi is actually bidding for a hat-trick of wins at the World Championships after also partnering Alan Maldini to victory in 2010. If successful, he will become the first player to win the title three times, although two-time champion Simona Briganti is also in the running to achieve the same feat in the women’s event.

In their last outing together, Calbucci and Meliconi finished runners-up on home soil at the recent Grade 1 event in Rovigo, losing to compatriots Michele Cappelletti and Luca Carli 63 63 in the final. Cappelletti and Carli, who were semifinalists at the World Championships in 2011, currently share the No. 2 spot in the world rankings and provide the greatest threat to the title.

The top seeds at last year’s World Championships, Matteo Marighella and Alex Mingozzi, won’t be teaming up together this time due to an injury for Marighella. In his absence, Mingozzi is instead partnering Marco Faccini. Likewise, the runners-up in 2011, Marco Ludovici and Giulio Petrucci, have also parted company this time, Ludovici is playing with Fabrizio Avantaggiato and Petrucci is partnering Luca Rosatone.

The reigning women’s champions, Briganti and Laura Olivieri, will be favourites to repeat their triumph, entering the tournament as the No. 1 seeds. The Italian pair warmed up with a win at the Grade 2 event in Cagliari in May, although they slipped to a narrow first round defeat against Giulia Curzi and Giorgia Gadoni at the Grade 1 event in Rovigo earlier this month.

Italian partnership Simona Bonadonna and Eva D’Elia will be among the challengers in Burgas, as will Brazilian duo Samantha Barijan and Joana Cortez. The South Americans are bidding to become the first non-Italian players to win a title at the World Championships.