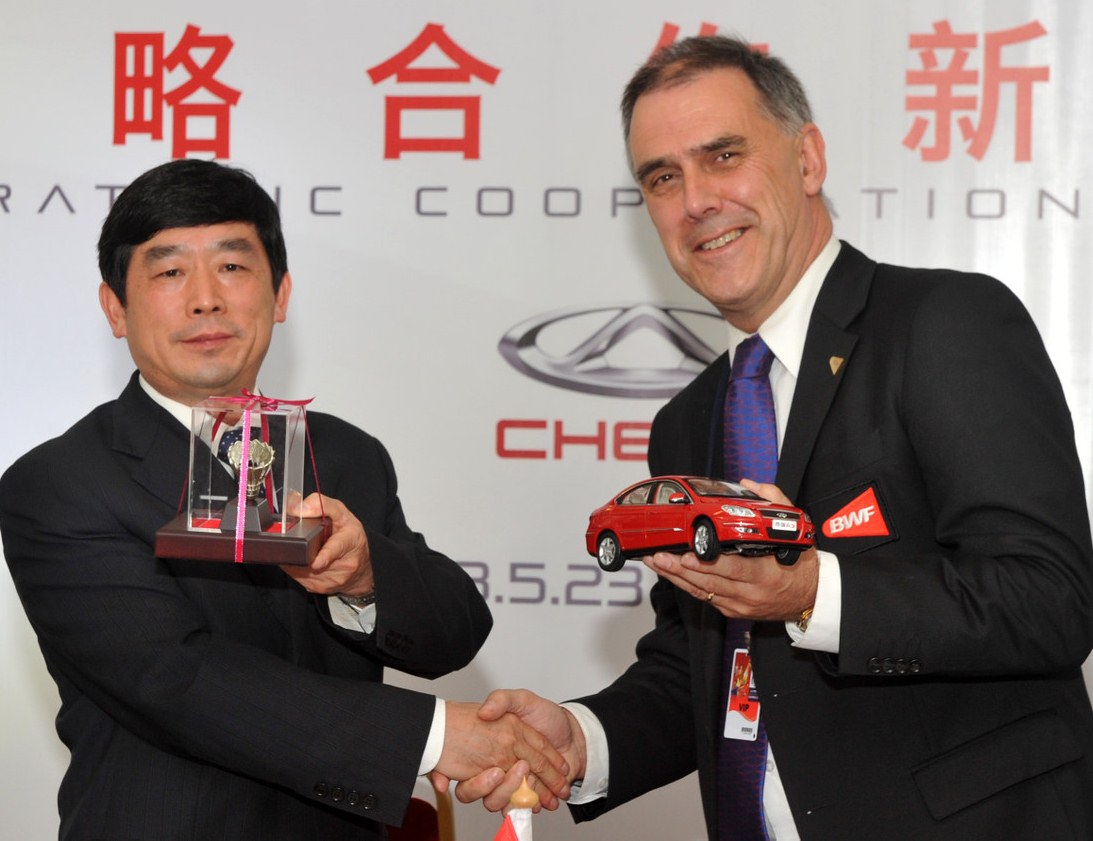 The four-year contract – from 2013 to 2016 – was announced at a press conference at Putra Stadium for the signing of the Memorandum of Understanding (MOU). This was attended by BWF and Chery officials, including General Manager of Chery International, Zhou Biren; Chery’s Vice President, Zhang Gui Bing; BWF Vice President – Europe, Gregory Verpoorten; BWF Chair of Marketing, Nigel Skelt and BWF Secretary General, Thomas Lund.

Zhou and Skelt performed the honours of inking the partnership agreement which was witnessed by badminton world No.1 and Malaysian superstar, Lee Chong Wei, as well as domestic and foreign media, many of whom are in Kuala Lumpur for the ongoing Li-Ning BWF Sudirman Cup.

The official signing heralds the start of a strategic partnership between BWF and Chery. It is the first occasion that a Chinese automobile brand is establishing a strategic agreement with an international sports federation.

“There are many examples of automobile brands collaborating successfully with premier sports events and we believe this has the makings of another win-win alliance. This four-year commitment will see Chery lending valuable support and presence to BWF Major Events, including the World Championships, the Thomas/Uber Cups and indeed the Sudirman Cup,” said Skelt, in a brief speech.

“It is a significant undertaking and we appreciate Chery’s confidence in BWF and our products. We, in turn, look forward to this partnership blossoming in the years to come to badminton’s benefit – as we continue showcasing some of the best of our sport to the world while seeking out future generations of players – an area into which I understand Chery will soon be venturing.”

In his remarks, Zhou hailed the partnership as “another major milestone for Chery”, adding that “through this partnership, Chery aims to increase worldwide brand awareness through the influence of the BWF”.

“Badminton is a sport that is well received both domestically and worldwide. This forms a good interactive platform for Chery and its consumers. China’s professional badminton players have always been amongst the best in the world. Through this partnership, we hope to show that the Chinese motoring industry is also catching up with the rest of the world. We believed that the collaboration with BWF will be mutually beneficial.”

Both organisations highlighted their similar values such as a shared passion for badminton and the desire to promote and spread core values associated with the sport such as excellence, professionalism, integrity and equality.

Meanwhile, BWF lauded the support of Malaysian companies – Petron and Nationwide – for the Li-Ning BWF Sudirman Cup. BWF Secretary General Thomas Lund said it was great to see “local businesses, which are patronised by Malaysians, partnering with BWF and contributing to a sport about which Malaysians are so passionate”. —- BWF