Home  »  OTHER SPORTS   »   A Better World Through Surfing and SUP: 37 Young Surfers Around the Globe Reap Benefits of 2017 ISA Scholarship Program

By ISA / Tom Lloyd, La Jolla, California, August 16, 2017: The International Surfing Association (ISA) is proud to announce that 37 surfers from 19 countries have been selected as beneficiaries of the 2017 ISA Scholarship Program, receiving a total of sum of USD $20,000 to help finance their education and passion for Surfing.

The ISA Scholarship program was established in 2007 and aims to financially support surfers 18 years and younger to further their education, pay for travel to surf contests, pay for contest fees, and upgrade their surfing equipment.

In the eleven years of the program’s existence, USD $268,500 has been awarded via more than 300 scholarships to surfers from all five continents of the world.

ISA Scholarship winners are selected based on financial needs, commitment to education, and passion for Surfing.

At the 2016 VISSLA ISA World Junior Surfing Championship in the Azores, twelve ISA Scholarship winners representing all five continents competed for their National Surfing Teams in a historic edition of the event that broke the records for country and athlete participation.

Additionally, Hawaii’s Summer Macedobecame the first ISA Scholarship winner to earn an individual Gold Medal after a historic performance in the Girls U-16 Division at the 2015 VISSLA ISA World Junior Surfing Championship in Oceanside, California.

“The financial aid provided by the ISA Scholarship Program is a crucial part of supporting the next generation of surfers and ensuring a bright future for our sport. This program lays down the foundation for the grassroots growth and development that can use Surfing as a tool to improve the lives of young people and create positive social change around the world.

“With dozens of scholarship recipient surfers going on to represent their nations in ISA World Championships, and even some who have won Gold Medals, the program has a proven track record of helping young surfers in need and allowing them to continue pursuing their dreams.

“With Surfing’s Olympic debut set to take place in just three short years, the Olympic dream is more alive than ever within the youth Surfing community. It’s possible that we could see a scholarship winner with a medal around their neck at the Tokyo 2020 Olympics.” 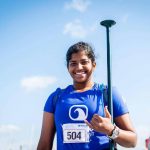 Tanvi Jagadish is a 17-year-old professional SUP Racer in India, the first female professional to practice the sport in her country.

Tanvi’s goal is to empower women in India and break down gender barriers to practice sport. Tanvi made a big leap into the international spotlight as she became part of the first Indian team to compete in an ISA event at the 2016 Fiji ISA World SUP and Paddleboard Championship. 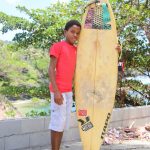 At 13-years-old, Oba Lewis sees this scholarship award as important to keep his family financially stable and allow him to keep pursuing Surfing in his home country of Trinidad and Tobago and abroad.

Oba has discovered that Surfing provides a healthy path that allows him to stay out of trouble.

With his scholarship award, Oba will replace his broken surfboard and he hopes to travel to Barbados for a surf contest, which would be his first time out of his home country.

Despite being born with Congenital Malformation, 12-year-old Freddy Marimón hasn’t let his physical challenges keep him out of the water. Freddy competes on Colombia’s National Surfing Circuit among able-bodied competitors.

Freddy made his country of Colombia proud as he was their sole representative at the 2016 Stance ISA World Adaptive Surfing Championship, where he finished in fifth place in his division.

Freddy would like to continue working at becoming a better surfer, and get good grades in school so one day he can study to become a veterinarian