In a recent statement and interview with immaf.org, Brown cited IMMAF’s optimism as a response to recent developments in the Olympic world.

“Up until July, the bid to host the 2024 Games was a two-horse race between Paris and Los Angeles, which we were watching closely. The host city is significant because it has the power to elect non-Olympic disciplines into the Games as demonstration sports, and it is under this banner that we would expect MMA to debut.

“It would certainly have been bad news for MMA, if Paris had defeated LA because MMA competition is outlawed in France. Since the IOC has now decided to simultaneously allocate the 2024 and 2028 Games to Los Angeles and Paris, and Los Angeles has opted to host the 2028 edition, we feel optimistic about MMA’s chances. 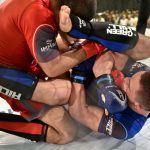 “We believe our prospects for the Los Angeles Games to be strong, because MMA is a mainstream sport in the US and has a significant media, commercial and political presence. MMA is recognised under state laws there and in LA it is regulated lawfully under the Californian State Athletic Commission.

“While we will continue lobbying in France and for inclusion in 2024, I am more confident about MMA’s inclusion for 2028.”

“MMA is the number one sport in the world in terms of growth and complexity. There is no other sport with as many facets and as many demands on its athletes as MMA.

IMMAF’s fine amateur sportsmen and women surely deserve to be broadcast on the Olympic platform and for their achievements to be shared with sports fans worldwide.

“The IMMAF has worked very hard and against all odds to develop the amateur sport. As we’ve progressed we’ve continued to hold our Olympic vision, alongside safety and athletic development, in our hearts.

“To unveil ‘Olympic’ MMA in the USA would be to present it in the sport’s modern birthplace, from where it grew up and got big, the place with the highest density of MMA fans in world. Sports fans world over deserve to watch this unique sport, in a well-regulated format, in the Olympic Games” —- IMMAF