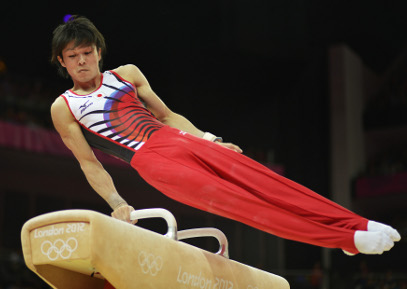 London – GBR, August 02, 2012: World Champion Kohei Uchimura of Japan will begin his bid for Olympic glory in the Men’s Individual All-Around Final in the precise spot where his last appearance at Greenwich Arena ended – on the Pommel Horse.

Uchimura’s revised score after the judges’ reviewing of his horse dismount was a major talking point after Monday’s Men’s Team Final, lifting Japan as it did into the Silver-medal position. Yet a gymnast with Uchimura’s golden touch was never going to be satisfied with a repeat of finishing second behind China, as had previously happened to Japan in Beijing.

“When the ranking changed, I was still not so happy,” said the 23-year-old, who will hope to avoid a second case of déjà vu today, having missed out on Gold when finishing second to China’s Yang Wei in the All-around in 2008.

The most admired gymnast of his generation and winner of the last three World Championships, Uchimura no longer has China’s Yang Wei in his way yet he qualified down in ninth place with a score of 89.764 after two falls. He improved on that, though, in the Team Final, scoring 92.048 – albeit he still fell once.

Uchimura’s challengers include United States duo Danell Leyva, top in qualification with a score of 91.265 on Saturday, and John Orozco, who was fourth in qualifying. That pair will have to shrug off their disappointment after Monday’s Team Final ended with USA down in fifth place. Both Leyva (13.400) and Orozco (12.933) had problems on Pommel Horse in that final and Orozco’s subsequent fall on Vault effectively ended the American medal challenge.

Other hopefuls include David Belyavskiy, who is bidding to take Russia’s first men’s All-around medal since Alexei Nemov struck Gold in 2000. Belyavskiy finished second in qualifying (90.832) after outscoring Leyva on Pommel Horse and Vault and tying with him on Floor.

Germany’s Fabian Hambuchen was third in qualifying (90.765) and said afterwards that he was feeling much stronger mentally than in Beijing, where he took Bronze on Horizontal bar. “I feel more confident, more focused on the technical side not on medals or results,” he said, yet a medal may beckon if he can improve on his Pommel Horse routine.

Ukraine’s Mykola Kuksenkov’s sixth place in qualification suggests he is another contender, although his father and coach Yuliy admitted after the Team Final that he was struggling with an injury.

Finally, British hopes of another medal to follow their much-celebrated team Bronze may rest on the broad shoulders of Kristian Thomas, who qualified in fifth place. The host nation have not won an Individual All-around medal since 1908 but after playing a decisive role in ending their century-long wait for a team medal, Thomas could be forgiven for thinking anything is possible.

For Kohei Uchimura, the long wait ended at North Greenwich Arena on Wednesday evening when he finally clasped his hands on the Olympic Gold medal that so many in the Artistic Gymnastics community had believed was his destiny.

The Silver medallist in the Men’s Individual All-around event at Beijing 2008, Uchimura had since won three successive World Championships as well as the acclaim of fellow gymnasts the world over. But it was Olympic glory that the Japanese craved more than anything and it felt like nothing else in the world, he admitted, after topping the field with a score of 92.690, ahead of fellow medallists Marcel Nguyen of Germany (91.031) and USA’s Danell Leyva (90.698).

“I’ve been aiming for this for a long time and now I have achieved it. It’s a dream,” he said. “I have been World Champion in the All-around three times in a row, but this is a different feeling. The Olympics are only once every four years so I have been waiting for this moment.”

It seemed ironic that Uchimura should start the final on Pommel Horse. It was one of two apparatuses on which he had fallen when qualifying in ninth place; moreover, it was his dismount from thepommel horse in Monday’s Men’s Team Final that was at the centre of the scoring appeal that eventually led to Japan leapfrogging Ukraine and Britain to claim Silver.

“That was first time I’d started on the Pommel Horse in the last four years so I was wondering what to do at the very beginning,” admitted Uchimura. As it was he scored 15.066 with a confident routine and by the third rotation had moved out in front thanks to a superb Vault that earned 16.266 points.

Uchimura, who reduced the difficulty of his Horizontal Bar routine, said he had been confident he had “a good floor routine to finish on” and so it proved. Although he touched his hands to the floor in a tumbling element, he stepped off the floor with a smile, knowing the Gold was his as Japanese flags were waved around the arena. “I am so grateful, that is all I can say – it was not my ability but also because of all the support I received,” said the 23-year.old, Japan’s first Olympic All-around Champion since Koji Gushiken in 1984.

Uchimura added that he had taken extra motivation from the sight of injured team-mate Koji Yamamuro in his bed that morning. “I was trying to do my best for him as well,” said the champion, and the same went for Yamamuro’s replacement, Kazuhito Tanaka, who nearly earned a surprise Silver medal but came off the pommel horse in his final routine, having entered the last rotation in second place.

“Even though I fell I didn’t give up on my last routine; I wanted to be brave for my team-mate Yamamuro,” said Tanaka, who still has a medal chance on Parallel Bars.

As it was, there was still a surprise Silver medallist in the shape of German gymnast Marcel Nguyen. “I am very surprised it worked so well for me today,” he said. “I didn’t expect to get a Silver medal and be sitting in a press conference.”

Nguyen, Germany’s first medallist in the event since 1936, started slowly with a score of 13.666 on Pommel Horse but subsequently earned the day’s highest score on Rings (15.366) and joint-highest on Parallel Bars (15.833) with Leyva. “I stayed up on each apparatus,” he said. “After the Pommel Horse I was quite far behind but managed to catch up.”

He clinched his Silver after showing admirable composure on his Floor routine – the very last of the competition. With the crowd roaring in appreciation of Leyva’s effort on Horizontal Bar, the elegant German kept his focus. “I heard it but it didn’t bother me, I just carried on with my routine,” said Nyugen, who collected 15.300 points to secure his medal.

Like Nyugen, Bronze medallist Leyva also mounted an impressive recovery having been placed joint-17th after three rotations. As in the Men’s Team Final, the Pommel Horse seemed to have proved his nemesis as he struggled on his handstand dismount in the second rotation. “I had almost written myself off but I thought I had to relax and put my faith in myself, my training and my coaches,” said the American, who was first in qualifying.

“I didn’t do the pommel routine I wanted to do but I channeled that into positive energy, I kept fighting and finished really strong. I am really happy with the way I finished.”

With his coach and stepfather Yin Alvarez hopping about like a jack-in-the-box on the sidelines, Leyva delivered excellent routines on Vault, Parallel Bars and Horizontal Bar. With the last of the three, he performed a risky routine that earned the top score (15.700) on that apparatus and ensured his place on the podium, 0.266 points ahead of Ukraine’s Mykola Kuksenkov.

Levya spoke about his wish to one day match Uchimura’s achievement but that could prove easier said than done, with the new champion already looking ahead to the next Olympics. “Rio is a vision I have in mind,” said Uchimura. “I want to challenge myself to the limit.” —- FIG