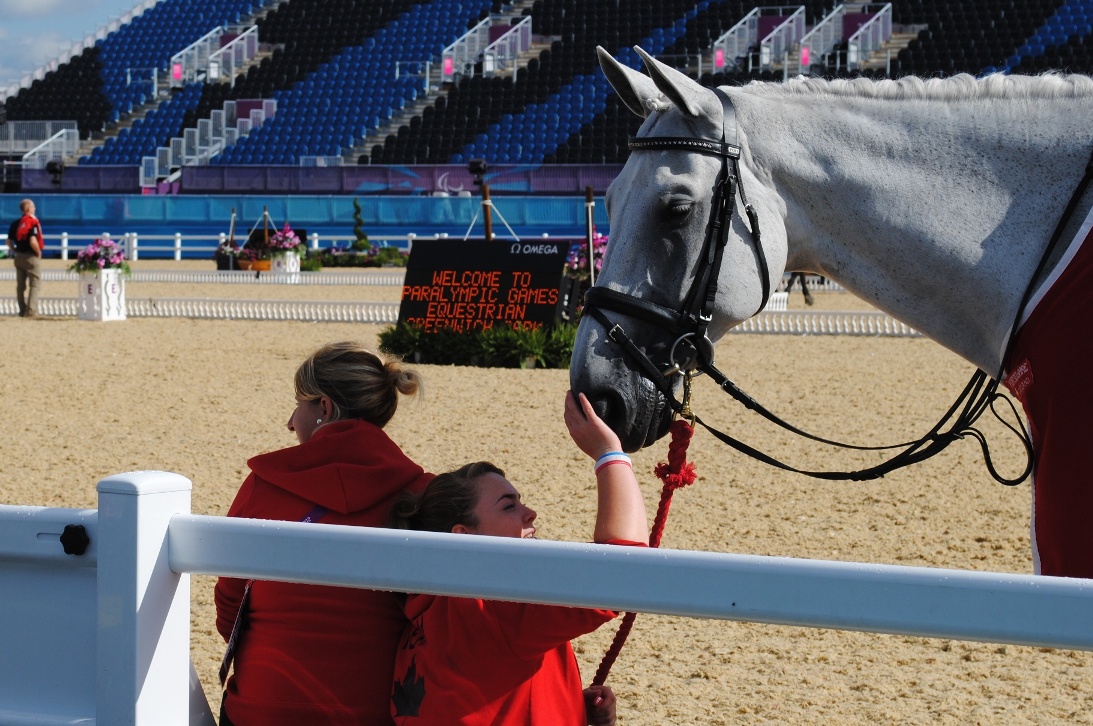 London – GBR, August 28, 2012: Final countdown, With just 24 hours to go to the London 2012 Paralympic Games Opening Ceremony, excitement and great expectations are building up in the Olympic venues dotted around the city whilst record ticket sales – over 2.2 million tickets sold – are already hailing this edition as the greatest ever.

This will be the fifth time Para-Equestrian Dressage is on the programme but it is the first time it is held in a country with such a strong Para-Equestrian culture, so strong that since it became a Paralympic sport in 1996, Great Britain has held the team title on every occasion as well as leading the individual medal count by a whopping margin.

Seventy-eight riders and 77 horses (two riders will be using the same horse) will be competing over the six days of competition from Thursday 30 August to Wednesday 4 September. The athletes are divided into five Grades (Ia, Ib, II, III, IV, V) and will be looking to impress the judges in the Team Test, Individual Championship Test and Freestyle, with 11 sets of medals up for grabs, two per Grade and the overall team medals.

There will be many familiar faces and medallists from previous Games here at Greenwich Park looking to secure the ultimate prize, and none more so than Lee Pearson, Great Britain and the world’s most successful Para-Equestrian to date, having won three gold medals (individual Championship, Freestyle and Team) at three Paralympic Games – 2000, 2004 and 2008 – taking his gold medal tally to an impressive nine.

Lee Pearson will be the most experienced team GBR member this year, competing at his fourth Paralympic Games, but he is not the most Games experienced out there, with France’s Nathalie Bizet, Norway’s Jens Lasse Dokkan and Germany’s Angelika Trabert all competing for the fifth time – which means they have attended every edition of the Paralympic Games since Equestrian sport joined the programme in 1996.

Competitors from 27 nations will be taking part in this edition with the ages of the athletes spanning over five decades, from Singapore’s 16 year old Gemma Rose Jen Foo to Canada’s Eleonore Elstone, aged 60.

The venue is ready and the horse inspection tomorrow morning will be the start of proceedings for what is set to be an incredible Paralympic experience for all the athletes, support teams, volunteers and fans. For information regarding schedules, results, start lists and more, check out the London 2012 Equestrian Hub.

Lee Pearson has attended 3 editions of the Paralympic Games (2000, 2004 and 2008) and on each occasion secured all three gold medals available to him (Individual, Freestyle and Team) and clearly leads the individual medal count.

Laurentia Tan from Singapore became in 2008 the first Asian rider to win a medal at the equestrian events of the Paralympic Games and will be competing again in 2012 with the first Singaporean team.

They have participated at every Paralmypic edition since Dressage joined the programme in 1996: Nathalie Bizet (FRA), Jens Lasse Dokkan (NOR) and Angelika Trabert (GER).

78 riders and 77 horses will be taking part in the equestrian events of the London 2012 Paralympic Games.

27 Nations will compete in the equestrian events of the London 2012 Paralympic Games.

The youngest rider competing in the equestrian events of the Paralympic Games is Singapore’s 16 year old Gemma Rose Jen Foo.

The oldest competitor in the equestrian events of the Paralympic Games is Canada’s Eleonore Elstone, aged 60.

Lee Frawley is the first rider to ever represent the Virgin Islands in the equestrian events of the Paralmypic Games.

Laurentia Tan (SIN): “Reach for the stars and go for your dreams. I’ve been inspired by everything I have seen here, thank you to everyone for all the support.”

Lee Pearson (GBR): “It’s a team effort getting here let alone getting a gold medal, and it’s thanks to all those people behind the scenes, helping us on a day to day basis, the trainers, the coaches, the grooms, the sponsors, the physios, our families – basically a large team of dedicated people that enable us to compete at this level, and sometimes bring home medals – thank you.”

Philippa Johnson (RSA): “One of most wonderful things about Paralympics and other disabled sports is that everyone is out there to help each other. It’s about camaraderie and working together and it’s about giving back to your sport.”

Lee Pearson (GBR): “I hope this will change my life and show that I am not a flash in the pan. So bring on Paralympics 2012. I hope that my success will inspire other people.” —- FEI