This decision taken today by the membership of the International Olympic Committee (IOC) at the 133rd IOC Session in Buenos Aires. 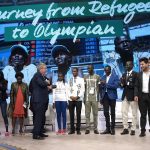 The initiative is a continuation of the IOC’s commitment to play its part in addressing the global refugee crisis and another opportunity to continue to convey the message of solidarity and hope to millions of refugee and internally displaced athletes around the world.

The IOC Session has mandated Olympic Solidarity to establish the conditions for participation and define the identification and selection process of the team.

These elements will carry out in close collaboration with the National Olympic Committees, the International Sport Federations, the Organising Committee Tokyo 2020 and the UN Refugee Agency, UNHCR.

The announcement of the Refugee Olympic Team Tokyo 2020 members will make in 2020.

IOC President Thomas Bach said: “The IOC Session has once again endorsed this initiative. In an ideal world, we would not need to have a Refugee Team at the Olympic Games.

But, unfortunately, the reasons why we first created a Refugee Olympic Team before the Olympic Games Rio 2016 continue to persist.

We will do our utmost to welcome refugee athletes and give them a home and a flag in the Olympic Village in Tokyo with all the Olympic athletes from 206 National Olympic Committees.

This is the continuation of an exciting, human and Olympic journey, and a reminder to refugees that they didn’t forget.”

UNHCR High Commissioner Filippo Grandi commended the decision: “In 2016, the Rio refugee team captured the imagination of people around the world and showed the human side of the global refugee crisis through sport.

I’m delighted that this tradition is to continue in Tokyo.

Giving these exceptional young people the opportunity to compete at the very highest levels is admirable.”

Back in 2015, the first-ever Refugee Olympic Team formed by the IOC.

Ten athletes chosen to represent people who are too often forgotten.

As they marched in the Opening Ceremony, two swimmers, two judokas, a marathon runner and five middle-distance runners who originally hailed from Ethiopia, South Sudan, Syria and the Democratic Republic of the Congo became instant role models for the 68.5 million or so refugees and internally displaced people, and true global ambassadors for the values of Olympism.

Since the Olympic Games, the IOC has continued to support these 10 Refugee Olympians, as well as a number of other refugee athletes across five continents via Olympic Solidarity’s Refugee Athlete Support Programme.

Refugee Olympic Team Tokyo 2020/Through scholarships, which come in the form of monthly training grants and fixed competition subsidies, Olympic Solidarity and their host National Olympic Committees help these refugee athletes to prepare for and participate in national and international competitions.

UNHCR, through its long term collaboration with the IOC, plays a crucial role in all stages of selection, approval and follow up of the athletes.

Furthermore, in September 2017, the IOC launched the Olympic Refuge Foundation to support more broadly the protection and empowerment of vulnerable displaced people through sport and through the creation of safe spaces; again, partnering with UNHCR and local implementation partners in the field.

For the last 20 years, and with the collaboration of UNHCR, the IOC has been providing relief to refugees and internally displaced people by using the power of sport to promote youth development, education, social integration and health.

These actions have brought the joy of sport and the related psychological healing to refugee populations in many camps and settlements around the world. —- IOC

About the Olympic Refuge Foundation here