Zurich, Oct 09, 2018: Today FIFA launched its first-ever global strategy for women’s football which charts the course for how FIFA will work with confederations and Member Associations (MAs), clubs and players, the media, fans and other stakeholders to realise the full potential that exists within the women’s game.

FIFA strongly believes that women’s football brings one very important benefit to the many young girls and women involved in the game – empowerment. 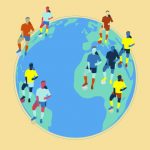 “As FIFA’s first female Secretary General I am proud to launch our first-ever global strategy for women’s football.

The women’s game is a top priority for FIFA and via our new strategy we will work hand-in-hand with our 211 member associations around the world to increase grassroots participation, enhance the commercial value of the women’s game and strengthen the structures surrounding women’s football to ensure that everything we do is sustainable and has strong results.

Most importantly it will make football more accessible to girls and women and encourage female empowerment, a subject of great importance, now more than ever before.”

As part of its commitment to supporting and furthering the women’s game, FIFA established its first-ever Women’s Football Division in 2016 under Chief Women’s Football Officer Sarai Bareman.

This Division will work closely with MAs around the world via workshops and special initiatives to assist them in bringing together key stakeholders to discuss, develop and implement their respective women’s football strategies and to ensure the greatest impact possible of their efforts to develop and grow the women’s game.

Additional information on the FIFA Strategy for Women’s Football can be found here.