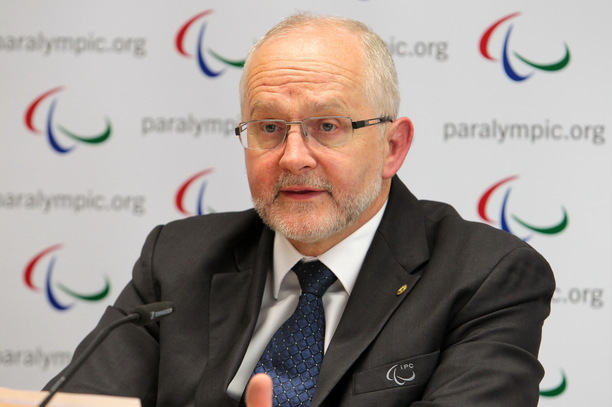 Bonn-Germany, April 20, 2012: International Paralympic Committee (IPC) President Sir Philip Craven has credited the Barcelona 1992 Paralympic Games as acting as the trigger point for the exponential growth the Paralympic Movement has enjoyed in the last 20 years. Speaking at `Paralympic Evening 2012‘, an event held by the Spanish Paralympic Committee in Madrid, Spain on Thursday 19 April and attended by HRH Infanta Elena, Sir Philip said he would be forever grateful for the 92 Games which attracted 3,001 athletes from 83 countries (Paralympic Movements).

“Many people talk about the Paralympic Movement coming of age at the last Paralympics in 2008. The Beijing Games were the best ever however I truly believe the foundations for that success were laid here in Spain 20 years ago when Barcelona staged the Paralympic Games,” explained Sir Philip who also referred to this weekend’s big football fixture between Barcelona and Real Madrid.

“Those Games gave us many firsts. It was the first time the crowds made the Paralympics feel like a real, proper sporting event. Over 12 days of competition, more than 1.5 million fans flocked to the venues and many more were locked out!

“The atmospheres inside the venues were electric, with fans of all ages showing the same level of passionate and excitable support you’d expect to see and hear at this weekend’s El Classico.”

Sir Philip also talked of the legacy the Barcelona Games left not only for future Games Organizing Committees and the Spanish Paralympic Committee, but also for Madrid in their bid to land the 2020 Games.

“Having never finished in the top 10 of the medals table at any previous Games, Spain finished fifth in Barcelona winning 107 medals, including 34 golds,” said Sir Philip.

“Since then continued support from Government and sponsors has seen Spain maintain its position as one of the world’s leading Paralympic nations. “I am sure the amazing memories we all have from the Barcelona Games 20 years ago can only benefit Madrid in their quest to host the Olympic and Paralympic Games in 2020,” he added.

Sir Philip is in the Spanish capital until Sunday (22 April) together with the IPC Governing Board who will be holding three days of meetings. On the agenda at the 61st IPC Governing Board meeting are update presentations from future Organizing Committees of the Paralympic Games, the IPC’s audited accounts for 2011 and a number of proposals for approval from the various IPC Standing Committees.

The IPC Anti-Doping Statistics for 2011 will be also presented together with the qualification criteria for the Sochi 2014 Paralympic Winter Games.