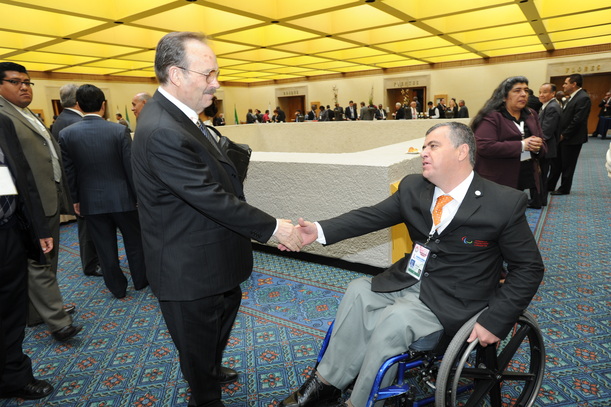 Last year Guadalajara, Mexico also staged both Games. The Pan American Games featured 6,000 athletes from 42 countries competing in 36 sports whilst the Parapans attracted 1,300 athletes from 24 countries. In total there were 277 medal events in the latter event across 13 sports.

The next Games will take place in Toronto in 2015 and the Local Organizing Committee stated in its winning bid the desire to stage both Games after each other. Ocatvio Londoño, President of the Americas Paralympic Committee, who was an invited guest at the PASO General Assembly is delighted at the growing working partnership that is developing between the APC and PASO.

“This announcement is excellent news for the development of Paralympic Sport in the Americas,” said Londoño. “It is a step in the right direction of fulfilling our aim of having inclusive sport in all the 42 countries of the American continent.

“Staging the Pan and Parapan American Games back-to-back has proven to be a winning formula since 2007 with both Games continuing to grow in size and stature.”

Ocatvio Londoño added: “I am overwhelmed by the support that PASO has shown the APC and the Paralympic Movement in the Americas. I would personally like to thank Mario for his kindness, generosity and unwavering support.

“It demonstrates the harmony and willingness of the two organizations to work together. We share some common goals – namely growing sport in this continent – and with this extra support we will go some way to supporting the United Nations convention that speaks of the right to sport for all human beings.”