London – GBR, August 04, 2012: With two more victories in the eighth and final session of swimming at these 2012 Olympic Games, the team of USA completed in the best possible way its supremacy in the Aquatics Centre, accumulating a total of 30 medals, including 16 gold (exactly the half of the titles at stake)! Moreover, and as in Athens and Beijing, one swimmer emerged from this week of swimming, superstar Michael Phelps, who retired after the 4x100m medley relay, bagging a total of 22 Olympic medals (and 18 gold), an unprecedented (and, who knows, unbeatable) record.

The domination of USA was overwhelming in these 2012 Olympics. They got the triple of gold medals than their closest competitors (China, with 5), and also the triple number of total medals of the remaining successful teams in London (Japan with 11, China and Australia with 10).

Four years ago, at the “Water Cube”, the North Americans had earned 31 medals, but only 12 in gold. Besides this success, a group of five countries can also celebrate these Games as landmarks for the development of their swimming teams: China, second in the medal table with 10 awards (including five gold), France, the best European nation with seven podium presences (including four victories), Netherlands (four medals and two victories), Japan (11 awards, including three silver and eight bronze), and South Africa (three medals, including two gold).

Despite its 10 medals (and only one victory), Australia got its worst performance since 1992, while some traditional powerhouses in Europe had an edition of the Games that won’t bring good memories: Germany didn’t have any medallist in the British capital (the last Games without German medals in Swimming were held 80 years ago… in 1932!),

Italy also left with empty hands (worse outcome since 1984), as well as Sweden, Poland or Ukraine. Among the nations of the Old Continent with some reasons to celebrate, we find only (and besides France and the Netherlands) Hungary (two medals), Spain (also two podium presences), Lithuania (first medal ever) and Belarus (two silver, also a première for this country).

The hosts, Great Britain, also did not fulfil all their credentials, getting only three medals (one silver and two bronze). The British delegation was naturally expecting much more at these Games, after its three medals in Beijing, including two gold awards. The “God save the Queen” anthem never echoed in the Aquatics Centre, frustrating the many thousands of spectators filling the stands of the pool.

The last session of swimming reflected the trend of the eight days of competition, with USA winning the two last relays, both the 4x100m medley for men and women. In the men’s field, Michael Phelps (butterfly), accompanied by Matt Grevers (backstroke), Brendan Hansen (breaststroke) and Nathan Adrian (free) touched home in 3:29.35, being followed by Japan (silver in 3:31.26) and Australia (bronze in 3:31.58). It was the 16th and final gold medal for USA at these Games and the last official race in Phelps’ career, representing his 18th Olympic gold and 22nd podium presence.

At the end of the official programme, the greatest Olympic ever received a “Lifetime Achievement Award” from the hands of FINA President Dr. Julio C. Maglione to mark the end of his brilliant career. 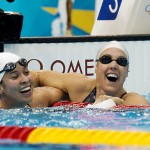 “I can probably sum it up in a couple of words: I have done everything I ever wanted to accomplish. I’m taking everything in, the memories I have from this week will never go away,” admitted an ecstatic Phelps. “The best part about the Olympics is that people from all over the world, they come all together to compete for these two weeks for gold medals in the best sporting event ever and to represent their country, go out and have fun, and that’s just something you don’t see every day and that I am really thankful to be part of.”

On his relation with Bob Bowman, whom he hugged at the end of his consecration tour on the pool deck: “Tonight was a very emotional night for Bob and I, to be here today with all that he’s done for me, I love him to death, I’m thankful to have somebody who has cared so much for me for the last 15 years.”

Among women, the North Americans also dominated the last relay, getting the gold in a new World Record of 3:52.05 – improving the previous best global mark set by China at the 2009 FINA World Championships in Rome (ITA), in 3:52.19. Australia arrived second in 3:54.02, while Japan added another bronze to its collection, touching third in 3:55.73.

“We were so close last year in Shanghai (to WR) and to finally get it this year, it wraps up the meet for the US women’s team perfectly. This meet has been amazing, definitely for the US team but also to the other teams, to see how many WR were broken. Once you put that idea in your head (to break a WR), you go for it. The facility is amazing, the crowd was wonderful, all around it was a great pool and experience,” confessed Rebecca Soni (USA), after the relay success.

In the two individual finals of the day, Sun Yang (CHN) confirmed his status of favourite in the men’s 1500m free, earning the gold in a new World Record of 14:31.02 (he improved his own mark, set at the 2011 FINA World Championships in Shanghai, when he clocked 14:34.14). Things didn’t start well for Sun who, distracted by a whistle in the stands, made a false start, which was immediately exonerated by the referee. The incident did not bring negative effects in the Chinese star (already winner of the 400m free in London), who controlled the entirety of the race. The minor medals were won by Ryan Cochrane (CAN), silver in 14:39.63 and by Oussama Mellouli (TUN, and 2008 Olympic champion), third in 14:40.31.

“My coach said I was in good shape and that I could break my WR so I felt relaxed and confident before the race. Right from the start, I set my mind for the win and on breaking my WR. I just focused on my own race. I was really aiming for the win, it’s the gold I wanted the most,” declared Sun Yang.

Cochrane, third in Beijing, and silver here in London, said: “When he [Mellouli] passed me in Beijing I was not expecting it, this time I was expecting it and I was going to fight probably to death to make sure he did not put his hand on the wall first.” Mellouli was also happy with the race’s outcome: “What is happening to me is incredible, I was not 100% in shape before this race, and physically I was not even at 60%. It is wonderful to have this consecration, to renew the appearance on the podium four years after the gold in Beijing. A ‘little-known’ swimmer from ‘tiny’ Tunisia who climbs the podium in the world’s biggest sporting event, this is historical; this medal is Tunisia’s first at the London Olympics. This bronze is more important than the Beijing gold because these last two years were difficult mentally and physically. I’m not the young Mellouli that was in top shape anymore, who really wants it.”

In the shortest event of the programme, the women’s 50m free, Ranomi Kromowidjojo (NED) added one gold to the one obtained in the 100m free and left London as the “Queen of Sprint”. The Dutch champion arrived first in a new Olympic record of 24.05 (bettering by 0.01 the time of Germany’s Britta Steffen in Beijing). Steffen was also in the final, but could not offer what would have been the only medal for Germany at these Games, finishing fourth in 24.46. The silver went to Aliaksandra Herasimenia (BLR), already second in the 100m free, while the bronze went to the second Dutch of the final, Marleen Veldhuis (24.39).

Overall, nine World Records were established at the 2012 Olympic Games, marked by the successful retirement of Phelps, the triumph of USA, the emergence of new stars, the relatively weak performances of Europe and Australia and the difficulty in revalidating the Olympic titles of 2008 – only Phelps among men and Rebecca Soni (USA) in the women’s field were able to successfully defend their Beijing crowns. —- FINA/Image © Giorgio Scala