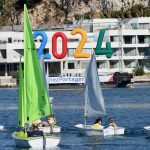 President Bach, arriving in France for the first time since Paris were awarded the 2024 Games, travelled to the south coast city together with President Macron and Mayor Hidalgo, before being welcomed in Marseille by a Paris 2024 delegation including President Tony Estanguet, French sports minster Laura Flessel, CNOSF President Denis Masseglia, and bid sports director Jean-Philippe Gatien.

The delegation then joined members of the French sailing team on a tour of the Marseille Marina, where more than 15,000 people will be able to watch sailing during the 2024 Games.

Marseille Mayor Jean-Claude Gaudin then welcomed the delegation to the Marseille City Hall for an official reception and press conference.

Marseille, the European Capital for Sport in 2017, with its diversity and openness, highlights the national unity around the 2024 Games and will serve as a host city for both sailing and football.

French President, Emmanuel Macron, said:
“I was delighted to welcome IOC President Thomas Bach to Marseille today, and to share our vision as to how Paris 2024 will benefit the whole of our nation. Marseille is a hub of sport, culture and inclusion, and will provide something special in 2024. France is so excited to receive the Games and we are looking forward to the journey ahead.”

Paris 2024 President, Tony Estanguet, said:
“It is great to be here in Marseille today after our success in Lima and an honour to show President Bach around this stunning city and explain more about our 2024 Olympic plans. The whole team is so motivated to deliver all that we have set out and promised in the bid.

“There has been a great co-operation with the city and the athletes of Marseille throughout the campaign and now we are on track to develop a great Games experience here in 2024 and with a strong legacy for the city.”

Paris Mayor, Anne Hidalgo, added:
“After the vote in Lima we felt the need to welcome the IOC president in Marseille. Firstly to thank Jean-Claude Gaudin for his support during the campaign. Secondly to underline the fact that when Paris 2024 wins the victory is shared with the entire country.

“These Games will be of benefit to Parisians, residents of the Île-de-France Region and also the French people. This collective project will definitely reinforce togetherness in our country.”