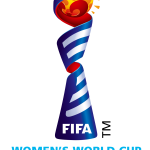 France is often considered as being synonymous with history and style, elements echoed in the emblem which features the competition trophy wrapped in historic marinière stripes, worn by French sailors in the past and the fashion conscious today.

At the top of the trophy is a stylised football surrounded by eight decorative shards of light to symbolise the eighth edition of the FIFA Women’s World Cup.

Light, and the idea of illumination are themes key to identity of the tournament and are captured with the official slogan, DARE TO SHINE™.

The phrase reflects the changing nature of football and the evolution of the women’s competition, which will have its time to shine all over France in 2019.

Speaking at the launch event the FIFA President said: “Women’s football has entered a bright new era and we are very much looking forward to seeing a sensational FIFA Women’s World Cup take place in France in 2019.

The Official Slogan and Official Emblem of the competition are a perfect mix of history, style and innovation, which France is famous for, and I am certain that the commitment and dedication of the LOC and host cities around the country will make this tournament unique.”FFF President added:

“In less than two years’ time, France will, for the first time in its history, host the FIFA Women’s World Cup.

We are proud and honoured to be doing so, as it reflects our firm commitment to nurture women’s football and its development, a goal that the French Football Association has been pursuing through the National Plan for the Promotion of Women’s Football, which it launched six years ago.

This, the eighth FIFA Women’s World Cup, will be a landmark occasion. Its success as a sporting event that captures the public imagination hinges on support from a number of stakeholders: our cities, regions, leagues, districts, amateur clubs and professional clubs and the people of France.

The next FIFA Women’s World Cup will provide a springboard for France’s women’s team. Our Bleues must Dare to Shine, which I am sure they will.

Make no mistake; we will be doing all we can.”The FIFA Women’s World Cup will set the stage for the world’s best players to compete in world-class venues across France in Grenoble, Le Havre, Lyon, Montpellier, Nice, Paris, Reims, Rennes and Valenciennes.