Home  »  OLYMPIC   »   Ilya Zakharov gets the gold in an amazing 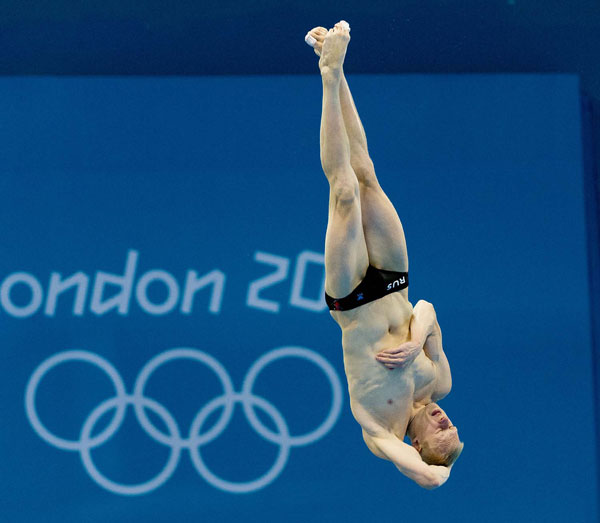 London – GBR, August 8, 2012: Four hours after the first gold in the Aquatics Centre (thanks to the duet in synchronised swimming), Russia could celebrate their second title in the FINA sports at these Games by winning the men’s 3m springboard of the diving programme. In the most thrilling and interesting final so far in this discipline, Ilya Zakharov proved that the difficult balance between choosing an easy programme (with less risks) and selecting a very complicated set of dives (with its associated chances of failing) is one of the keys for succeeding in diving. Accumulating a total DD of 21.5 in his six dives, the Russian champion was by far the competitor who risked more – at the end, this choice was fruitful and allowed Zakharov to “break” the four consecutive Olympic titles for China in the event: in 1996 and 2000 Ni Xiong had won, in 2004 Bo Peng was the best and in 2008, at the “Water Cube”, the gold went to Chong He. 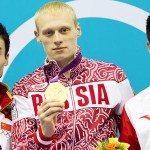 Chong He – adding to his Olympic title, He has medalled five times at the FINA World Championships – was clearly the diver to beat in the final, after finishing first in the semis and second in the preliminaries (where the Russian was better). But He never appeared to be totally serene and despite choosing also a difficult set of dives (total DD of 21.0), he wasn’t superb in any of them. The situation became so complicated for him that at the end of the third round (there were six) he was even in the fifth position. He recovered to fourth after dives 4 and 5 and then mastered the forward 2 ½ somersault 3 twists (pike, DD 3.9), to finally get the bronze in 524.15. A disappointing result for He, used to shine at the highest level – he was 2009 and 2001 world champion in Rome (ITA) and Shanghai (CHN) respectively.

“In the end, I still feel happy. I started my final very bad and I still managed the bronze! I didn’t feel any pressure, I wasn’t OK tonight. That’s all,” declared He.

Always consistent and “synchronised” with the level of difficulty selected, Zakharov took the definitive option for the gold in his sixth and last attempt, the 109C (forward 4 ½ somersault, DD 3.8), collecting an amazing 104.50 from the judges. It was by far the best 109C of the session – the second place of this “championship” going to Chris Mears, from Great Britain, in 100.70 (his final dive, delighting the many thousands of spectators filling the stands). Despite this effort from the local hero, he finished ninth of the final.

Besides his magnificent 109C, Zakharov was also the best of the field in the complicated 5156B (forward 2 ½ somersault 3 twists, pike, DD 3.9), getting 99.45 and contributing to his winning total of 555.90. Participating at his first Olympic Games, Zakharov (21 years old) was silver medallist in this event at the FINA World Championships in 2011. His triumph in London constitutes the first success of Russia in this event, after the victory of Aleksander Portnov (from Soviet Union) at the 1980 Olympics in Moscow (RUS). Overall, the last gold medals for Russian divers at the Games were obtained by Dmitry Sautin in the men’s 10m platform in 1996 and by Sautin with Igor Loukashin in 2000, in the synchro 10m platform. In the women’s field, Vera Ilyna/Yulia Pakhalina were the last Olympic winners, in 2000, also in the 3m springboard synchro.

“I’m delighted with what happened. Too many emotions so far…” declared Zakharov. “I am very pleased to have taken at least one gold medal away from China! I remember that at the beginning of my career I didn’t like to work so hard, I was complaining about the amount of training. But gradually, it became better and I decided to continue. Today it paid off,” he considered.

Asked about the key of success for this win, namely the choice of a very difficult DD, the Russian diver replied: “I wasn’t thinking before my dives on what I would be able to achieve or not achieve. My priority was just the next dive. In concrete, I believe that my good last two dives were decisive for this triumph. Moreover, I wasn’t paying attention to other competitors and I didn’t notice what was happening with the Chinese. When I performed well my last dive and I looked into the scoreboard, all my emotions came out,” he considered. “My idol in this discipline is Dmitry Sautin, but I am still too young to make any kind of comparison with him,” confessed Zakharov, silver medallist in these Games with Kuznetsov in the 3m synchronised event. On the topic of the limits of DD in diving, he concluded: “If more complex dives arrive, I’ll learn them. If it becomes more complicated, we will certainly be there!”

With a DD totalling 20.4, the second Chinese of this final, Kai Qin was more successful than his teammate and earned the silver medal in 541.75. Despite this success, he was in tears at the end of his effort, certainly thinking that the outcome of this final will prevent China to achieve the so awaited clean sweep of the eight Olympic gold medals. Already winner of the synchronised event at the Aquatics Centre, Qin is a five-time gold medallist at FINA World Championships. He was the third best of the semis, after having known a challenging preliminary round, where his 109C was far from perfect.

“There is certainly some pressure for every athlete, but if you want to be good you have to hold on to that pressure. Tonight, he [Zakharov] was better and I sincerely congratulate him!” admitted Qin.

For China, this outcome (not winning the gold) is similar to what happened in the last session of the Beijing Games, when Matthew Mitcham (AUS) got the gold in the men’s 10m platform, or in 2007 at the FINA World Championships: in Melbourne (AUS), another Russian, Gleb Galperin was also better than the Chinese in the higher board. China’s consolation was a 10-gold clean sweep at home, at the 2011 FINA World Championships in Shanghai. With two events to conclude the diving programme of these Games (10m platform individual for men and women), the question is naturally the following: will China recover from this “earthquake” or will other “intruders” be able to grab the gold at the Aquatics Centre?

Far behind the podium, Patrick Hausding (GER) concluded in fourth (Germany hasn’t got any medal at these Games in Aquatics so far…), while Troy Dumais (USA) and Yahel Castillo (MEX) were at some stage of the final in a good position to enter the “podium’s area”. In a discreet 11th place, Alexandre Despatie (CAN) was far from his glory days – the Canadian star won 10 medals already in Olympic Games and FINA World Championships. —- FINA/Photo: Giorgio Scala