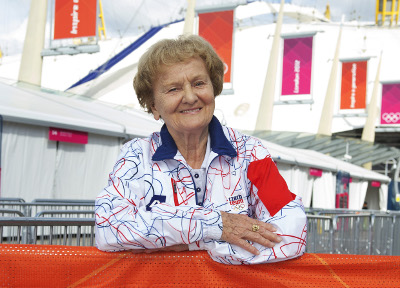 London – GBR, August 08, 2012: Remembering, Triumph and tragedy are overused words in the sporting lexicon but when it comes to telling the tale of Czechoslovakia’s Women’s Gymnastics gold medal winners at the 1948 Olympic Games in London, they are the very least that is required.

This, after all, was a group of gymnasts who stood in tears on top of the Olympic podium as their national flag rose laced with black ribbon to mark the death of a team-mate. It was a moment that remains etched in the memory of Vera Ruzickova and little wonder. As the reserve in that Czechoslovakia team, she replaced the unfortunate Elishka Misakova, who was diagnosed with polio, isolated in a London hospital and later died.

Ruzickova, now 84, has been back in London with the Czech Olympic delegation, watching the Artistic Gymnastics programme. Recalling those events of 64 years ago, she says: “We were all crying. It was very special.” On the podium with her was Slavka, sister of the 21-year-old Elishka – and the only one allowed to visit the hospital after the death of her sibling, who subsequently became the only person to receive a posthumous Olympic medal.

Ruzickova explains: “After she was diagnosed, she had to go into hospital and we didn’t see her any more. Polio was very contagious so there were worries we might have it – we’d been together for weeks night and day. Among the team we said that we’d fight to win the gold and when we won, Elishka would win too but the night after the competition she died.

“We couldn’t take the body home to Prague,” she adds. “She had to be cremated, so we went home with a gold medal and with an urn.” The husband of Misakova’s other sister, Anna, flew the plane that took the team back to Prague. “He had been a pilot in the RAF [Royal Air Force ] in the Second World War, and he asked to fly over and bring us home.”

Bittersweet only hints at the emotions that Ruzickova felt during those London Games more than half a century ago. At 20, she was the youngest member of a Czechoslovakia women’s squad that had come to Britain hoping to improve on the silver medal won at the last Olympics in 1936.

The Olympic experience then was utterly different. There was no Olympic Village, for a start. The Czechoslovakian women’s gymnasts stayed at St Helen’s College, a boarding school in west London, where they slept “five or six to a room” and shared the facilities with the Hungarian and Yugoslavian teams, befriending the latter – by contrast, the Hungarians, who took silver, “were big rivals”.

There was no special transport for the athletes. “We had to go on our own to training and to the competition, just use our travel pass and go on the Underground or bus.

“It was three years after the war and 12 years after the last Olympic Games, it was such a big atmosphere,” Ruzickova adds. “Young people had come together again in sport, so it was very special. You could see some buildings were destroyed but the people were very open and nice to everybody.”

The world of gymnastics was different too. The 1948 Games were the last featuring only a team event for the women, and TV footage of the Czechoslovakians training shows them in white singlets and blue shorts and displaying graceful movements as they practice a team exercise to music.

Ruzickova, who later became a coach and international judge, remembers: “We had swinging rings, gym exercises on the floor – one with clubs and one without – and team routines on the floor. We also did the beam and the vault.”

Ruzickova and her team-mates had learned gymnastics with Sokol, a youth sport movement which then had more than one million members, though she only focused exclusively on the sport from 16 – indeed she was second best in the country at diving as a schoolgirl. By the age of 20, she was ready for the Olympics – or almost. “The team was named two months before the Games but when I had to take the place of Elishka, I had two days, two training sessions.”

The 1948 competition should have been staged outdoors but stormy weather meant it was switched to an indoor venue at Earls Court. Despite everything Ruzickova shone for Czechoslovakia’s gold medal team during the two-day event. “I was twice in the fourth place on apparatus, and had one sixth place. Altogether I was sixth from 90 gymnasts,” she explains. Her brother-in-law Zdenek Ruzicka did even better, taking two bronze medals.

Ruzickova’s return to London for this year’s Games brought back other memories of helping introduce fresh techniques to British Gymnastics in the 1960s, as a guest of Jim and Pauline Prestidge, leading figures in the sport’s development in the United Kingdom.

But it is her stories of 1948 that fascinate. Owing to their friend’s death, Ruzickova and her team-mates did not take part in the Closing Ceremony that year, but sat watching it from the Wembley Stadium stands. “We weren’t in the mood to laugh and smile,” she recalls. Hers was a team in shock and even today, over six decades on, she remembers her tragic colleague with great sadness.

“She didn’t speak English, she didn’t understand anybody, she was just isolated. It must have been so difficult for her.” It really was the best and worst of times. —- FIG