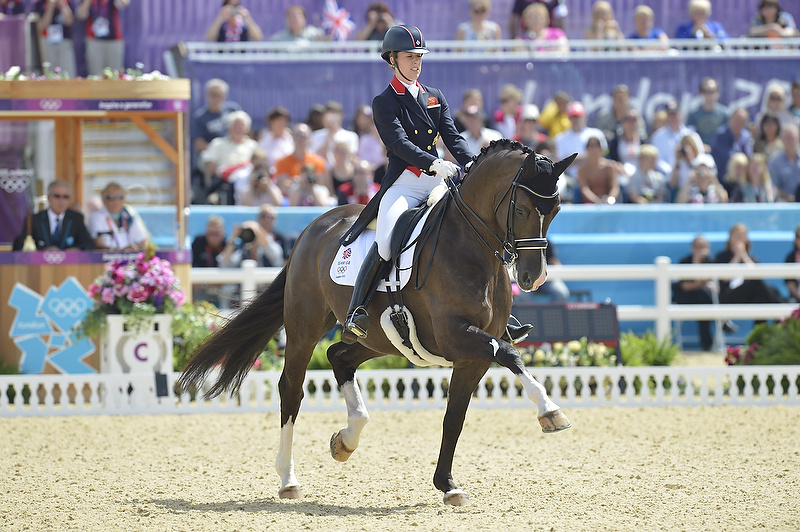 London – GBR, August 03, 2012: A fabulous performance from Charlotte Dujardin and Valegro ensured that Britain maintains the lead in the team competition after the Dressage Grand Prix concluded at the London 2012 Olympic equestrian venue at Greenwich Park today. But the advantage is a very slender one, as Germany lies only just over half a point behind going into the medal-deciding Grand Prix Special next Tuesday.

The Dutch lie third, boosted by a brilliant test from double Reem Acra FEI World Cup™ Dressage champions Adelinde Cornelissen and Parzival who slotted into runner-up spot ahead of Germany’s Helen Langehanenberg (Damon Hill) and Kristina Sprehe (Desperados) who claimed third and fourth places individually. There was a time when tense situations really overwhelmed the Dutch rider’s big chestnut gelding, Parzival, but he has learned to cope much better in recent years. However Cornelissen had an un-nerving moment as she rode down to the arena. “He almost stopped and said ‘Aaaagh, what are all those people doing in there?’ But when we got going he said, ‘Oh, I know this stuff’, so it was fine”, the 33-year-old rider said with a laugh afterwards.

Dujardin’s score of 83.663 set a new Olympic record, although due to changes to the rules this only dates back to the Athens Games in 2004, as results were measured in points before that, so it is impossible to make comparisons with earlier events. The prodigiously talented 27-year-old knew that she and her wonder-horse had produced something extraordinary today however. “It was unbelievable! I wanted to come here and to have fun. I wanted to go out and show what this horse can do, it was a once in a lifetime opportunity”, she said. It certainly looked like fun, and all five members of the Ground Jury were in agreement that she was their first choice.

It was Dujardin’s team-mate and mentor, Carl Hester, who held the overnight lead as today’s action began, and his score of 77.720 wasn’t threatened by the opening group of riders. The Netherlands‘ Edward Gal posted 75.395 when last to go before the first break riding the 11-year-old Undercover, but it was Germany’s Sprehe and her lovely stallion Desperados who dislodged the Briton from pole position despite a stumble at the end of the extended canter which led to the stallion kicking the arena boards before completing with a flourish. An otherwise lovely test, full of lightness, from the free-moving stallion was rewarded with the new leading score of 79.119.

That target remained unchallenged until Dujardin set off with the 10-year-old gelding Valegro, whose confidence and concentration is astounding for such a young horse, and whose partnership with his rider allows him to demonstrate his exceptional ability just about every time he goes into the ring. At Hagen CDI 4* in Germany in April, the dynamic pair brought the crowd to their feet when setting a new standard in the Grand Prix Special with a mark of 88.022. Dujardin is a relative rookie at the top end of the Dressage game, but was a member of Great Britain’s first ever team gold medal winning side at the FEI European Dressage Championships in Rotterdam (NED) last August, and it seems her star is ever in the ascendant. Having thrown down a mark of 83.663, to the delight of the ecstatic home crowd, she sat back today as the final group of riders took their turn. And they challenged all the way.

The 2009 FEI World Cup™ Dressage Final winning duo of Steffen Peters and Ravel improved the USA’s chances when putting 77.705 on the board with a great test that would eventually be good enough to clinch sixth place individually and move his country up to fifth place behind the very consistent Danes. But it was the penultimate partnership of Cornelissen and Parzival who came closest to Dujardin’s score.

Parzival’s initial surprise at the scale of what he was letting himself in for simply faded away, and he settled to produce one of the best performances of his career. Cornelissen didn’t appear to be battling his enormous strength this time around, and the movements looked softer and easier for both horse and rider. They worked in complete unison, the big horse pounding out his trademark piaffe and lovely passage to rack up a mark of 81.687 that would come closest to the leading score. There was something very convincing about it. Cornelissen said of her 15-year-old horse, “he really is super fit. I have devised a special training programme, and he has arrived in London at his fittest ever level. He feels really, really good”. And he looked it.

Last to go was Helen Langehanenberg and her stallion, Damon Hill, who slotted into third with a mark of 81.140 to secure Germany’s second-place position going into Tuesday’s team final competition. She was really pleased with her result. “My horse wasn’t either too fresh or too lazy, it just all felt perfect, and I’m delighted with him!” said the 30-year-old who has, for some time, been tipped as a medal contender.

It was Dujardin who was the show-stealer however, and her ability to rise to every new challenge is astounding. She doesn’t have nerves of steel, it seems she has no nerves at all. Her trainer and friend, Carl Hester, said that while he couldn’t get any sleep the night before he did his test, “Charlotte slept like a baby!” Her super-cool nature is one of her greatest assets it seems. “You wait a lifetime to get here (to the Olympic Games) and I would not want to spoil it by putting too much pressure on myself” she said today.

She’s already learning what it feels like to be a super-star. The reaction of the crowd after she delivered the ride of her life today was near-hysterical. “I loved every minute of it in there!” she said when she came out of the arena. “When you finish your final halt it is wonderful. The applause is just amazing, and I want to thank everyone who supported us.” She said Hester told her to “just enjoy it! He said it was an amazing opportunity to have a horse like Valegro.”

At the end of the day the leading four riders – Dujardin, Cornelissen, Langehanenberg and Sprehe, had all broken the Olympic record, but one of the most popular performances came, as it so often does, from Spain’s Juan Manuel Munoz Diaz, whose showmanship with his horse, Fuego, almost always secures a prime spot in the Freestyle at end of every championship. His score of 75.608 was really competitive today, and helped Spain to remain amongst the top-seven nations that qualify for Tuesday’s team medal decider which, with so little between the leading nations, promises to be a cracker.

Meanwhile the British jumping team talked about their hopes for the Olympic contest which begins tomorrow morning. And they are feeling fairly positive.

Asked to predict which team will reign supreme in London, Chef d’Equipe Rob Hoekstra said, “there are eight or nine teams that could win this, the US and Canadians are not in the Top League but they could do well, the Germans, the French, the Dutch are all strong. Depending on who’s in form on the day we could have a different result over five different days.”

Team member Nick Skelton was asked what it was like to be 6/1 favourite for the gold medal. “Someone has to be favourite and my horse has been great all season so it won’t make the pressure any greater than it already is. I’d rather be favourite than a rank outsider!” he said with a grin. Talking about his chosen ride, Big Star, he pointed out that the horse is “unproven at this level but he’s done everything right. He has tremendous ability and would have more in the tank than Carlo”, the horse with which he won individual bronze at the FEI European Championships in Madrid (ESP) last year. “Also, I don’t think he will do anything untoward, he’s a very easy horse, although I’m not saying anything against Carlo, I just think this horse has a bit extra to offer.”

Assessing British team chances he pointed out “we have some young horses, but look at last year in Madrid, possibly this team could be stronger than that. If everything falls into the right place we can show a good, strong hand here. To be in London is very special for us and it gives the team an advantage to be at home. To be honest this is probably my best chance I’ve ever had (of winning an Olympic medal),” he added.

The centre-line of the Dressage arena runs right along the Meridian line, the point from which everywhere else on earth is measured in terms of distance.

The second tranche of 25 riders competed in the Grand Prix today.

Canada was already out of contention since team-member David Marcus was eliminated yesterday.

The teams from Poland and Australia, who finished today in eighth and ninth places do not go forward to the Grand Prix Special.

To date, the record score in Grand Prix remains with The Netherlands Edward Gal and the stallion Totilas who registered 84.085 at the FEI European Championships at Windsor (GBR) in 2009 and 84.043 at the FEI World Equestrian Games™ at Lexington (USA) a year later.

Charlotte Dujardin’s score of 83.663, recorded today with Valegro, is the highest result at Olympic level since the current marking format was introduced for the Athens Olympic Games in 2004.

In Athens, the highest score in the Grand Prix was registered by Germany’s Ulla Salzgeber and Rusty – 78.208.

At the Beijing Games equestrian events in Hong Kong in 2008, the highest score in the Grand Prix was awarded to Germany’s Isabell Werth and Satchmo – 77.708. —- FEI, by Louise Parkes/Photo: FEI/Kit Houghton