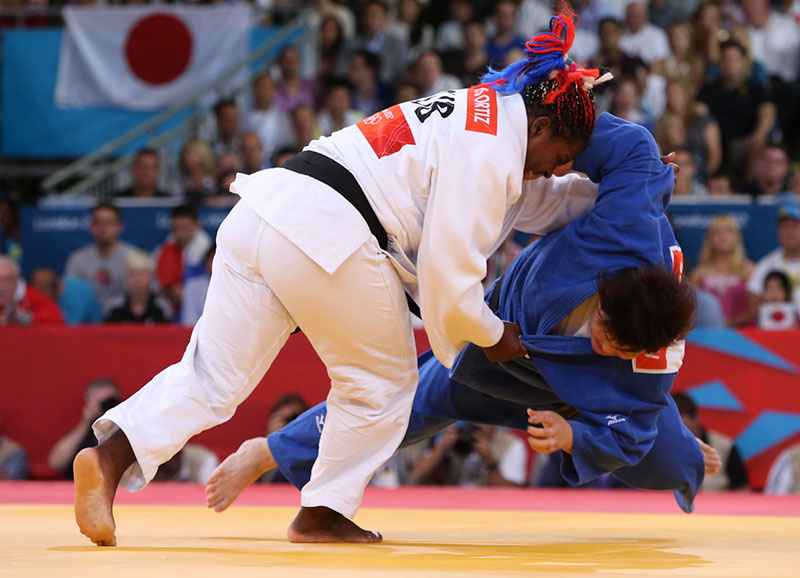 London – GBR, August 03, 2012: Teddy Riner has finally confirmed that he is one of the greatest judoka of all time, after winning the Olympic gold medal in the +100kgs category of the 2012 London Olympic Games. In the +78kgs Idalys Ortiz won Cuba’s first gold medal of the tournament, meaning that in addition to their two silver medals they end on fifth in the medal table. 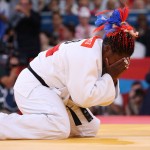 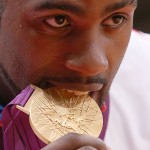 Riner, the five times World Champion, did everything required to take the one title that eluded him, after he lost so dramatically in the preliminaries of the 2008 Beijing Olympic Games before coming back to win the bronze medal. After a wonderful display of judo at the 2011 World Championships in Paris, Riner closed up in London, with three of his contests going the distance, including in the final against former triple World Champion Alexander Mikhaylin of Russia.

There was too much at stake for Riner to risk too much. The memory of Beijing was still raw. Until now. Riner was accompanied by an army of French fans, who sang his name from the start of the final to the end. This was an historic moment for judo. Riner stands on the cusp of breaking all judo records, and it seems like there in nothing that can stop him.

Mikhaylin’s silver medal in the final was their fifth men’s medal across the seven weights, including their three gold medals which puts them top of the medal table. Russia’s turnaround from bottom of the medal table in Beijing to top here in London is phenomenal. France and Korea are second and third with their two gold medals apiece, with traditional judo powerhouse Japan sitting in fourth, and Cuba in fifth. 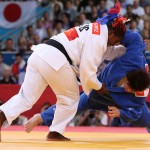 After losing to Mikhaylin in the semi final Andreas Toelzer, Germany’s world number two, bounced back to win the bronze medal, alongside Brazil’s Rafael Silva, whose medal pushed Brazil up to sixth in the table with one gold and three bronzes.

Before the Olympics had even started there seemed to be one certainty; that Wen Tong (CHN) would win the +78kgs category. The seven times World Champion has been head and shoulders above all opponents for a decade, and it was always assumed that she would take the title in London. But an incredible performance from Idalys Ortiz of Cuba in the semi-final, where she threw Tong for a Yuko, stopped the Chinese fighter from winning her second Olympic title.

Tong settled for bronze, beating Maria Altheman (BRA), while Ortiz overpowered the world number two and double World Champion Mika Sugimoto (JPN) in the final. The contest was decided on a referee’s flag decision, and went unanimously to Ortiz, whose attacks had been closer to scoring than the Japanese.

The second bronze medal was won by Great Britain’s Karina Bryant, who capped a tremendous career with a medal from the one tournament that was missing on her record. It left the host nation on a high, having won a silver medal yesterday through Gemma Gibbons in the -78kgs. It was a fairytale finish to an amazing judo tournament.

ROUND BY ROUND: WOMEN +78kg: ORTIZ’S SECOND EFFORT HITS THE TARGET

Cuban heavyweight Idalys Ortiz captured gold here in London following her bronze in Beijing four years ago. In the final against Japan’s Sugimoto Mika, 22 year old Ortiz not only kept pace with her opponent, but threatened often both in tachiwaza and newaza. Ortiz had lost to Sugimoto on four previous occasions but here neither fighter could come up with a score and the contest went into golden score. The extra period remained scoreless and the contest was decided by hantei, Ortiz getting the decision. In the process Ortiz dashed Japanese hopes of salvaging something from what is now the most disappointing Games ever for a Japanese judo team. “I’ve prepared very well for this Olympic tournament and I was very confident in my strength. I was particularly focused, after the bronze medal in Beijing, to improve on that. Indeed, I was so confident that I colored my hair in Cuba’s national colors whilst in Paris two weeks ago hoping to get the gold medal, said Ortiz.

Tong Wen CHN held Vanessa Zambotti MEX with kamishiogatame. Maria Suelen Altheman BRA threw Anne-Sophie Mondiere FRA for waza ari. Woojan Shaherkani KSA was thrown for ippon by Melissa Mojica PUR. The Saudi athlete was the first woman to represent her country at an Olympic Games and the nerves told. “Certainly being faced with such a large crowd is difficult, but manageable. I was a bit scared,” said Shaherkani. “I’m excited and proud to be representing my country, unfortunately I lost, but hopefully I’ll do better next time.” Sonia Asselah ALG was thrown for ippon with tani otoshi by Karina Bryant GBR.

Tong Wen CHN suffered a shock defeat when she was countered for yuko by Idalys Ortiz CUB. Tong failed to pressure the Cuban, whom she had beaten in all four of their previous meetings, either in tachiwaza or in her favorite newaza. “I knew that Tong is very strong but I exploited every opportunity I had to win and I succeeded,” said Ortiz. Her loss meant that none of the six Olympic champions from Beijing competing here were able to repeat. Sugimoto Mika JPN defeated Karina Bryant GBR by shido.

Iryna Kindzerska UKR faced not only Karina Bryant GBR in her bronze medal match but the weight of the home crowd. But the Ukranian youngster, just 21 years of age, scored first when she threw Bryant for waza ari with makikomi to set British nerves on edge. There was plenty of time on the clock however and the experienced Bryant set about pulling the score back with her own makikomi for waza ari to level the match. Kindzerska was not going to roll over however and went ahead by scoring yuko with seoi otoshi. But Byant finally pulled out her famed tani otoshi scoring waza ari awasete ippon to take a long awaited bronze medal for the veteran. Tong Wen CHN applied wakigatame for ippon to win a bronze medal. Despite the medal, the Chinese heavyweight left the arena in tears, bitterly disappointed at losing her title.

ROUND BY ROUND: MEN +100kg: FIRM FAVORITE RINER LIVES UP TO EXPECTATIONS

Winning Olympic gold is regarded by many as essential if one is to be considered among the greats of competitive judo. Teddy Riner FRA went a long way to cementing his place among the judo greats by taking gold here in London. In a final with Russia’s Alexander Mikhaylin that pitted youthful power against guile and experience, Riner opted, as he had earlier, for safety first, frustrating Mikhaylin with strong gripping and sufficient enough active intent to avoid picking up penalties.

The single shadow awarded to Mikhaylin was enough to gift Riner the gold medal and signal the start of French celebrations. For the last four years I’ve been thinking of this medal”, said Riner. “I think I’ll sleep with the medal tonight,” he added jokingly. Riner also made special mention of the tremendous support he’d received from his family and friends, many of whom were with him in London. “I also received thousands of messages and letters from all over France. So it is not only my victory, but something for the nation and all the team.” Runner-up Mikhaylin was disappointed with the nature and result of the contest. “But I saluted him [Riner] as champion as a gesture of fair play,” said Mikhaylin.

Andreas Toelzer GER defeated Vladut Simionescu ROU. Bor Barna HUN threw El Mehdi Malki MAR for ippon with harai goshi. Teddy Riner FRA threw Faicel Jaballah TUN for ippon with uchi mata. Rafael Silva BRA faced Marius Paskevicius LTH. The match went into golden score where Silva threw the Lituanian for ippon with makikomi. Oscar Brayson CUB threw Ricardo Blas GUM for ippon with te waza. Ihar Makarau BLR held Kamikawa Daiki JPN with kesagatame scoring yuko and putting out the Japanese heavyweight. Alexander Mikhaylin RUS was taken into golden score by Christopher Sherrington GBR where Mikhaylin threw the Britain for yuko with tai otoshi. “I’ve been hoping to come up against Mikhaylin for the past four years,” said Sherrington. But he is a tough guy and it was a great honour for me to be able to take him so far.” Kim Sung-Min KOR closed out the second round by throwing Matjaz Ceraj SLO for yuko with kata guruma.

Teddy Riner FRA took no chances with Kim Sung-Min KOR in their semi final match. The Frenchman fought a risk free five minutes to ensure a place in the final whilst Kim struggled to find any attacking opportunities the latter losing on penalties. Andrea Toelzer GER faced Alexander Mikhaylin RUS in the second of the afternoon’s semi finals. Tthe contest went into golden score where Toelzer received a shido that awarded the contest to Mikhaylin.

Ihar Makarau BLR faced Andreas Toelzer who was again able to manage his famous turnover this time into kamishigatame for ippon to take a bronze medal. The contest between Rafael Silva BRA and Kim Sung-Min KOR also went into golden score where the Brazilian won by hantei.