By Abdulla Mohammed Almarri, Budapest, Oct 24, 2018: Doha will play host to the world’s largest judo competitions after being awarded the hosting rights to the 2020 Masters Championship and the World Judo Championship 2023 thanks to an agreement signed today between Qatar Taekwondo, Judo and Karate Federation and the International Judo Federation (IJF).

The 2020 Masters Championship, which serves as a qualifier for the 2020 Tokyo Olympics, brings together the world’s top 16 players from each weight, while the 2023 World Championship will see more than 117 countries participate. 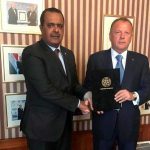 “It is an honor for the IJF to sign deals to organize the World Championships 2023 and Masters 2020 in Qatar, given that Qatar is one of the countries which contributes the most to the promotion and development of sports at the local and international levels,” Vizer said.

“Qatar has a major contribution (World Judo Championship 2023) to the international sports movement, sport being a universal value, accessible to all, and thus they support friendship and unity among the nations of the world, for peace and a better world,” the IJF president added.

Additionally, Qatar Taekwondo, Judo and Karate Federation and IJF signed another a partnership agreement whereby IJF would support Qatar’s judo team for a five-year period from 2019 to 2023 in a set of training camps as well as all international championships held under IJF umbrella.

Hosting the two high-profile championships stems from Qatar’s vision to “become a pioneering nation that brings the world together through sustainable sports development,” and goes in line with its four-pronged strategy that aims to raise the level of sports professionalism, initiate a partnership in sport, establish Qatar as a sports hub and practice sport for life.

Doha was entrusted with hosting the two prestigious championships thanks to Qatar’s extensive expertise in hosting major international sporting events such as the 2006 Asian Games, the AFC Asian Cup and the Arab Games in 2011, the World Handball Championship for Men, in addition to other continental and international tournaments.