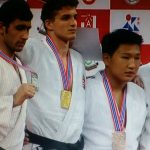 Khan in preliminary round was against Tajikistan’s Judoka KURBONO Emomrizo world ranking no 12.

Qaisar defeated him and qualified in Semi-final, where he was against Mongolian Judoka.

He defeated him by Ippon.

In final Qaisar was against World No 8, Hungarian Judoka, VEG Zsombor, who had defeated him in semi-final in Asian Cup Cadet, recently held in Hong Kong.

Qaisar Khan Judo is the first Judoka of Pakistan who got Silver medal at Asian level.

He will initiate his International career as Junior by participating in Asian Junior Judo Championships to be started tomorrow in Macau.

He has almost qualified for Youth Olympics 2018; officially list of the qualified Judokas will announce on 1st August by International Judo Federation (IJF).

If Pakistan Judo Team gets the opportunity to represent Pakistan in Asian Games.

The team will bring laurel to Pakistan by showing their worth in the Games and will raise the flag of Pakistan Internationally.

The Secretary General of Pakistan Judo Federation Mansoor Ahmed said that “Qaisar, a young Judoka from district Khyber of KPK is very talented and likewise Judokas will bring up to raise the flag of Pakistan internationally”.

Pakistan Judo Federation is very grateful to Pakistan Sports Board for their continuous supports the federation.

I request to Pakistan Sport Board to establish National Judo Training camp for the best achievements in the Games.”