Monaco, July 23, 2018: Jamaican sprint queen Veronica Campbell Brown, one of only two women in history to have twice won the Olympic 200m title, has become the latest global champion to give her support to IAAF Heritage. 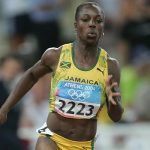 The IAAF Heritage Collection, which aims to preserve and savour the best athletics moments to help promote the sport and better engage with fans, was launched by IAAF President Sebastian Coe in Birmingham on Sunday 4 March 2018 on the last day of the IAAF World Indoor Championships.

During the past five months, IAAF Heritage, which is compiling the greatest ever collection of athletics artefacts and memorabilia, has been overwhelmed by the donations received from some of the greatest stars of the sport.

Veronica Campbell Brown, the eight-time Olympic and eleven-time World championships medallist, has generously donated the Jamaican team vest in which she sprinted to 200m gold at the 2004 Athens Olympic Games.

The donation to IAAF Heritage by Campbell-Brown, a UNESCO Champion for Sport ambassador whose personal foundation in Jamaica provides scholarships for high school girls to complete their secondary education, took place on Thursday (19) on the eve of the Herculis IAAF Diamond League meeting in Monaco.

“As champions, we must do everything we can to give back to the sport and help inspire the next generation of fans and athletes, which is why I’m donating my Olympic vest” said Veronica Campbell Brown, who in her prolifically successful career has also won two world indoor 60m titles.

“However good the entertainment, it’s increasingly necessary for every sport to adjust, thus enabling new fans to gravitate towards it,” she added.

“If we want our achievements and those of future champions to live in the memory for generations to come, we must support innovative ideas like IAAF Heritage.

This collection will travel the world, using video, photos and artefacts like my vest to promote athletics.”

There is already an IAAF Heritage Exhibition currently underway in Ostrava, Czech Republic. The ‘IAAF Heritage World / Continental Cup – 1977 to 2018 – Exhibition’ which opened on 5 June, as its name implies, celebrates the performances of the first competition which the IAAF created, the forerunner of the IAAF World Championships which began in 1983.

The IAAF World Cup in Athletics, which renamed the IAAF Continental Cup in 2010, celebrates its next edition in Ostrava on the weekend of 8-9 September.

The exhibition, at the Forum Nova Karolina Shopping Centre in the centre of the city, will be open until the last day of the championships.

We thank the Forum Nova Karolina Shopping Centre for their generous assistance in hosting the exhibition. —- IAAF