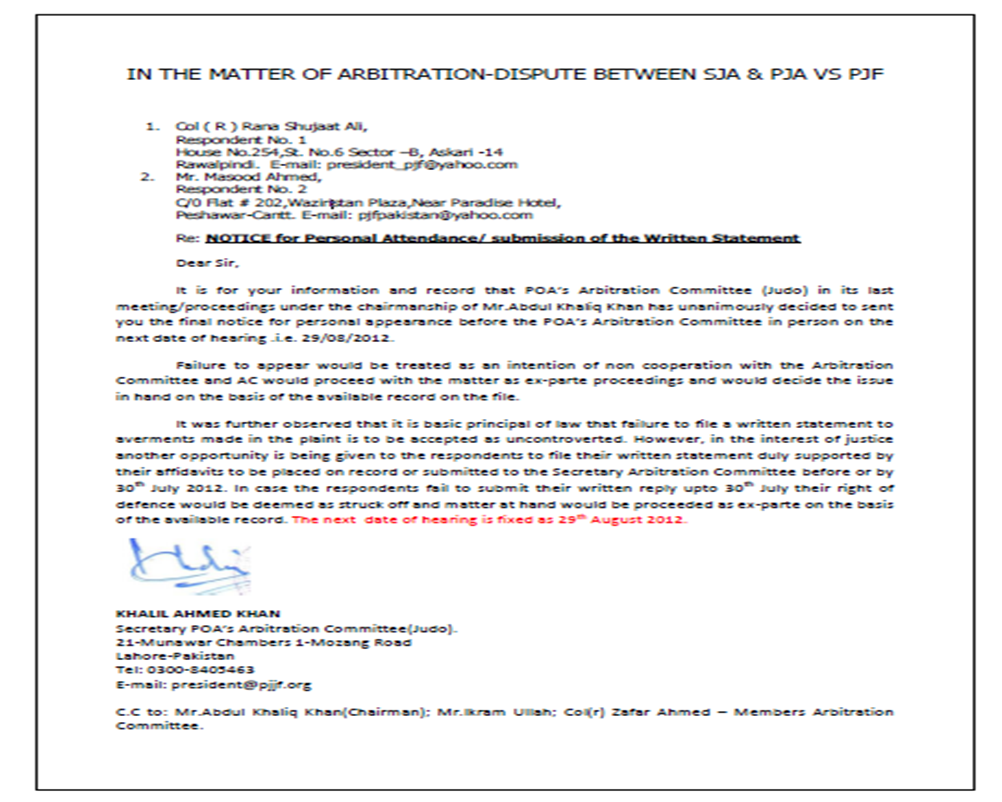 Peshawar – Pakistan, August 06, 2012: After very discriminating and distortion facts and projection of an incorrect perspective of the POA on the Sports Movement and development in Pakistan, Pakistan Judo Federation decided at last to move to Legal Courts in search of Justice, though even having the brightest performance and most medal winners Sports Body in Pakistan specially in South Asian Games, Asian Junior judo C’Ship – Korea and in many other International Judo C’ships.

It is worthwhile to mention here that POA has asked the PJF top officials in a letter to ensure their presence before the arbitration committee on August 29, 2012 9 (Letter is attached).

POA has taken an illegal action which violates even its own constitution because any provincial disputes should be resolved by the presidents of the respective Federations instead they move to Supreme Sports Body.

The Arbitration claimers are already went into legal court so then the existence of the arbitration committee become null and wide.

In the Case of Badminton, the Lahore High Court ruled recently that the POA did not have the right to form Arbitration Bodies, so if we make our presence, it will be considered as Contempt of Court. And if it was not stopped Pakistan Judo Federation will not only move to the Legal courts but also to make concerns with I.O.C.

And at present POA has confused the ruling of the Supreme Court as applicable to the autonomy of the National Federations. The Supreme Court ruling is very clear and it has upheld the PSB rules, specifically the one in question about the tenure of the office bearers and POA is doing this dilemma in order to save their skin because POA President is going to be affected by this law of TENURE, so, as earlier they were against Pakistan Athletics, Basketball, Badminton, Cycling and now on Judo.

Federations have no option but will have to incorporate the tenure-restriction clause in their constitution. At present, if any federation specially JUDO tries to disaffiliate itself from the PSB, it will be a contempt of court. Even if any federation severs ties with the PSB, it will not survive as the federations don’t have an independent role in the sports development and they depend in totality on the financial assistance of the government.

It is most unfortunate that POA, while claiming that ‘it is the prerogative of the General Council of the Federation and theirs alone” to make any change in the constitution of the federation and also that any matter ‘is an internal matter of the Federations and there should be no outside interference”, the POA has unfortunately contradicted itself on basic principle as outlined below, by itself being the major negative force indulging in ‘interference” in the National Federations.

i). Interference in the election of several federations.

ii). Setup of Arbitration Committees with the intent to change the election result without framing a need for arbitration, indeed even when there was none.

iii). Setup of parallel bodies as in the case of badminton, Cycling, boxing, Judo, Basketball etc.

And above all we didn’t receive yet any letter of Suspension from the higher authorities, but we came to know through media so we are replying in the same manner.

President, PJF said that : On August 05, 2012, thousands of Judokas in Pakistan and major Judo Association in Khyber Pakhtunkhawa which is in practice sine long was tried to be hijacked by the Newly formed so called K. P Judo Association with a work force of five or less from provisions as per constitution.

The K.P Judo Association constitution does not allow any other parallel body to exist in the same manner neither gives such rights to anybody to organize free and independent championships without the approvals of the concerned Federation.