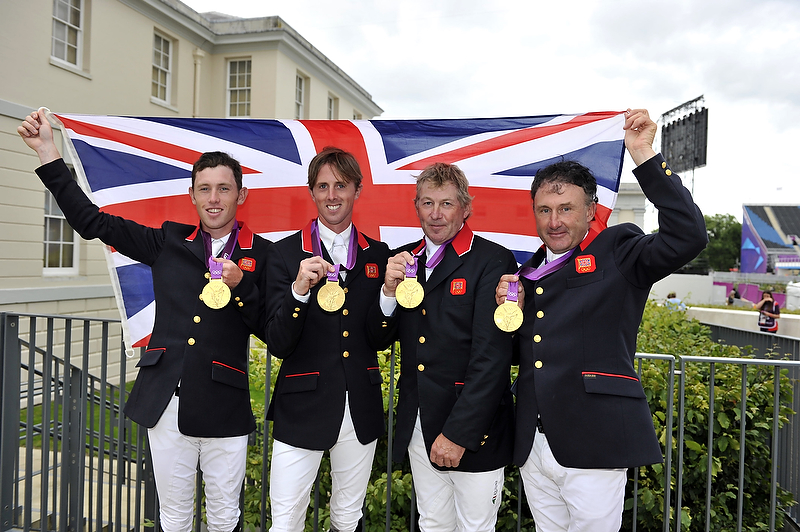 By Louise Parkes, London (GBR), August 06, 2012: There were ecstatic scenes in Greenwich Park this afternoon when Great Britain ended a 60-year drought to claim Jumping team gold for only the second time in the history of the Olympic Games. They had to battle all the way, and it came down to a two-way jump-off against The Netherlands, but Nick Skelton, Peter Charles, Ben Maher and Scott Brash triumphed in the finest style and, to put the icing on the cake, they did it on home soil. Saudi Arabia took bronze behind the Dutch, with Switzerland finishing fourth and just outside the medals.

For Skelton and Charles, level at this success has been a long time coming. “It’s taken me 54 years,” Skelton said today. “It’s unbelievable and what a place to do it! I have a wonderful horse and it’s a dream come true. It’s great for our country and great for our sport. The lads have done great” he added, turning to his team-mates, “and I’m really pleased for Pete (Charles). He has had a rough trip but he came good in the end.”

For 52-year-old Charles it was no easy ride. “I got off to a bad start, but this is as good as it gets!” he said as he grasped the gold medal hanging around his neck.

For Brash and Maher, Olympic glory has come early in their careers, but they both realised just what has been achieved today, and recognised that they were fortunate to contribute to it. “I’m delighted for the older guys. All these years they’ve worked hard, riding loads of different horses, and it’s great to play a part in helping them to achieve this – everyone played their part,” said 26-year-old Brash who is the youngest team member.

Brash broke into the British team for the Alltech FEI World Equestrian Games™ in Kentucky (USA) just two years ago, but only really clinched his place in the Olympic side with performances over the last eight months riding Hello Sanctos. He hails from Peebles in Scotland and, in an interesting coincidence, there was also a Scotsman on the only other British team to claim Olympic gold back in 1952. That was Douglas Stewart who rode Aherlow alongside Wilfred White (Nizefela) and Harry Llewellyn (Foxhunter).

Just eight nations battled it out in today’s second round of the team competition, and there was little dividing them as the class began. Brazil and the USA were carrying eight faults each following yesterday’s first round, Canada was carrying five and Great Britain, The Netherlands, Sweden and Switzerland were sharing silver medal position with four faults apiece while Saudi Arabia held the lead with just one time fault on the board.

But course designer Bob Ellis would quickly separate them with a big, demanding 13-fence track that was relentless from the outset. The opening oxer and following vertical led to a tricky three-fence line that began with the London 2012 vertical at three, followed by the White Cliffs open water at four and the Cutty Sark vertical at fence five. The stride distance between the first two here proved difficult to get and there were plenty of wet feet, but the most spectacular water-crossing was made by Avenzio, ridden by Japan’s Taizo Sugitani, who rose like a helicopter and danced around in the air before descending on the landing side.

The triple combination at fence seven was the next trouble-spot as the middle and final elements fell consistently, while the wide Nelson’s Column oxer at eight also claimed a number of victims, as did the Greenwich Meantime double at nine and the related-distance vertical at 10. And there was no let-up on the way home with another massive oxer at 11, and the penultimate maximum-height gate and big final oxer all taking their toll.

Disappeared from the Reckoning

The three-man Brazilian team disappeared from the reckoning when middle-man, Filho Fernandez riding Maestro St Lois, collected 46 faults on a nightmare tour of the track, and when the Americans added 20 more to their tally, their 28-fault total would also leave them well out of the frame.

Captain Canada, Ian Millar, left just the first element of the double at nine on the floor in an otherwise flawless tour of the track, but with only three team members remaining, the 17 picked up between Jill Henselwood (George) and Eric Lamaze (Derly Chin de Muze) put paid to Canadian chances. The Swedes lost their grip when Lisen Fredricson’s 12 faults had to be taken in to account after Henrik von Eckermann and Allerdings collected 16, and they had to settle for joint-sixth with the USA at the end of the day.

A clear round from Switzerland’s Pius Schwizer and Carlina put pressure on the Saudi Arabians whose anchorman, Abdullah Sharbatly, could not afford a double-error. But when the 2012 FEI World Equestrian Games™ individual silver medallist returned with just six faults, the Saudi side that also included HRH Prince Abdullah Al Saud (Davos), Kamal Bahamdan (Noblesse des Tess) and Ramzy Al Dukhami (Bayard van de Villa There) had bronze in their grasp.

The clash between the Dutch and British was spell-binding, Skelton opening the British account with a fabulous clear from Big Star, and Maher and his lovely stallion Tripple X lowering the oxer at eight before Brash put them right back in the game with a fabulous foot-perfect run with Hello Sanctos. Charles’ five faults with Vindicat was the discard this time around to leave them on a first-round total of four and a two-round total of eight.

Skelton set the pace with another stunning round and piled on the pressure with a super-fast time of 47.27 seconds that wasn’t matched by Vrieling, although he too left the new eight-fence track intact. Maher then raised the temperature with another British clear and when van der Vleuten returned with two down the Dutch were already looking vulnerable. Brash faulted just once and that British gold medal was coming ever closer when Houtzager, going for a careful clear, clipped the second element of the penultimate double.

A clear from Charles would clinch it now, and Vindicat, who had a big scare when crashing through the third fence in Saturday’s opener, rose to the occasion with a gutsy run that sent his rider’s fist punching into the air with pride as they raced through the finish.

Charles said afterwards – “I wasn’t much good for the rest of the week but I did good in the end! I got off to a bad start, but this is dream come true!”.It was also a dream come true for the entire stadium and the massive numbers of viewers following a fabulous piece of Olympic history live on television across the world.

The British team comprised of two of the greatest fighters in the game and two rising stars showed grit, talent and huge determination. The toughest of commentators could hardly hold back the tears that also filled Skelton’s eyes. So much pride and delight in achieving that ultimate goal. And it’s not over yet.

“We have the best horse and rider in the world right now, Nick Skelton,” said Charles of the man who goes into Wednesday’s individual final without having touched a pole so far. Double gold for Britain is not just a distant dream, it’s a strong possibility.

8 teams lined out on the final day of the team jumping competition.

2 teams went into a jump-off for gold – Great Britain and The Netherlands.

Just five riders jumped clear in today’s second round of the team competition.

Three of the British produced clears in the jump-off.

There were 13 fences on today’s testing track.

The triple combination at fence seven and the double at fence nine proved highly influential, as did the oxer at fence 11.

Great Britain has won Olympic jumping team gold on only one previous occasion – back in 1952 in Helsinki, Finland where the team consisted of Wilfred White (Nizefela), Douglas Stewart (Aherlow) and Harry Llewellyn (Foxhunter). —- Photo: FEI/Kit Houghton