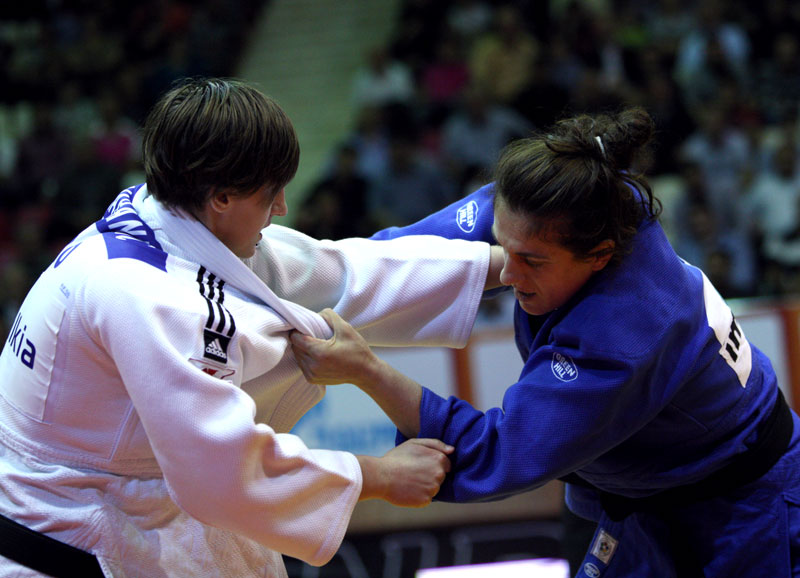 Baku-Azerbaijan (IJF), May 06, 2012: As it was the case during the first day of the Judo Grand Prix, Baku 2012, a numerous, enthusiastic and packed crowd was again present for the second and last day of competition at the Sarhadchi Sport Olympic Center in the outskirt of the Capital of Azerbaijan. No less than 8 weight categories were engaged in today’s tournament: Women’s -63, -70, -78 and +78kg and Men’s -81, -90, -100 and +100kg. Like during all the Grand Prix, points were awarded to the winners as follows: 200 points for the winner, 120 points for the silver medallist, 80 points for the bronze medallists, and 40 points for the 5th places. The points that count for the World Ranking list, will allow the IJF at the end of year to invite the top 16 athletes per weight category to participate in the World Judo Masters, which concludes every World Judo Tour season. 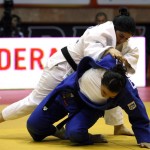 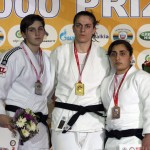 Bronze medallist at the World Championships, Tokyo 2010, YUSUBOVA was widely supported by her home public in the final of the women’s -63kg, but today Haruka YASUMATSU, from Japan, was the strongest. During more than 4 minutes and a half, the two competitors could not take the advantage, and the whole public was expecting the golden score, when, 10 seconds before the final gong, the Japanese engaged her left foot behind Yusubova’s left leg, for a left-handed o-soto-gari and a liberating ippon and a clear win. The bronze medal fight, which opposed Gemma HOWELL (GBR) and Andreja DAKOVIC (CRO), was not really spectacular. After 3 minutes and a half, Howell took the lead with a yuko corresponding to the two shido received by DAKOVIC and that was enough for the English young lady to win the first medal of the day.

It is a very intense final fight that was proposed to the public, which was cheering its favorite, SAFGULIYEV, Tural (AZE), like never before. Attack after attack, supported by an unbelievable atmosphere, SAFGULIYEV took the lead and never let it go. The first semi final was won by the Ukrainian POPOVYCH after a long fight, which ended after 2 minutes of golden score when a second penalty was given to his opponent ZURABIANI from Georgia, who finished third. The second semi-final was much more shorter as it took a little bit more than 1 minute for SAFGULIYEV to score ippon with a tremendous te-guruma, which gave no chance to MEHDIYEV to enter the final. 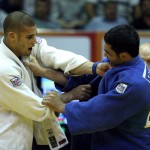 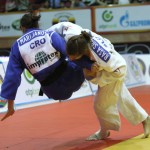 Number 5 in the World Ranking List, Rasa SRAKA (SLO) gave no chance and no hope to Kristina MARIJANOVIC (CRO) to win the gold medal. She scored a first waza-ari after only a few seconds in the final. She finally immobilized MARIJANOVIC and won an 11th title on the occasion of a world judo tour event.

The public really expected the young Gunay ALMAMMADLI (AZE) to be able to win against the strong Rasa SRAKA (SLO), but after a few seconds only, The Slovenian fighter went through her opponent defense with a precise right-handed o-soto-gari for ippon. The second semi final was no longer as it took only 40 seconds to the Croatian, MARIJANOVIC, to score a first waza-ari with an almost perfect movement, just before finishing the job by immobilizing MATNIYAZOVA (UZB), who couldn’t escape from MARIJANOVIC’s grip.

A first shido warning was given to GURBANOV (AZE) for griping the belt too long without attacking after a few seconds in the final. The first strong attack came from PANASENKOV and was rewarded with a yuko, which gave him the advantage after the half of the combat. Looking really tired, PANASENKOV continued to attack and to regularly put his opponent out of balance. That was enough for him to win this year’s edition of the Judo Grand Prix in Baku.

The first semi final of the day went to the golden score and even to the referee’s decision, none of the two athletes being able to find the smallest opportunity to score. Nevertheless, the three referees, without any hesitation gave his ticket to the final to Iurii PANASENKOV (RUS), who was definitely more active throughout the fight. The second semi-final was expected to be more animated as the local Ramin GURBANOV (AZE) stepped on the tatami against Zviad GOGOTCHURI (GEO). Exactly one minute after the first hadjime, GURBANOV launched an incredible ko-soto-gake, which fixed GOGOTCHURI widely on his back, with force, speed and control, for a clear ippon.

The final of the women’s -78kg category opposed the two Azeri Fighters, Gulsadaf KARIMOVA (AZE) and Farida GURBANOVA (AZE). After only one minute, KARIMOVA, scored a first waza-ari with a sutemi-waza, immediately followed by an immobilization for ippon.

BERDZENISHVILI from Georgia, scored a first yuko after the 40 first seconds of the final. But the 110th position at the World Ranking list of MAMMADOV is definitely not representative of the talent of that judoka and the tremendous o-goshi that he launched a bit later in the final, did not leave any chance to BERDZENISHVILI to counter attack. The public could relax and enjoy a new victory for Azerbaijan.

After the first semi finals of the previous categories, the atmosphere temperature raised a bit more when Elkhan MAMMADOV (AZE), bronze medallist at the world championships, Tokyo 2010 and several times winner of World Judo Tour events, stepped on the tatami for his semi-final in front of his public. Despite a tough fight against Georgian, Aleksandre MSKHALADZE, MAMMADOV was able to enter the final without great difficulties. The second semi final was the shortest of the weekend, with only 9 seconds on the mat. Immediately after the very first hadjime, LUCHYN launched a ko-soto-gake, which was instantly countered for ippon by BERDZENISHVILI, who rejoined MAMMADOV into the final.

The final of the women’s +78kg category was won by the Georgian, Irine LEONIDZE, with a yuko corresponding to the two shido received by her opponent for passivity. This victory brought the first gold medal of the week-end to Georgia, which had already collected several other medals. The bronze medal was won by Gulnara ASADOVA (AZE).

Until the last seconds, Russian, Soslan BOSTANOV, was leading with a yuko, but 35 seconds before the end of the fight, MOMOSE attacked, probably for the last time, and scored an ippon, ruining the hopes of BOSTANOV. The bronze medal was won by Andrey FATIYEV (AZE) in front of his teammate Rafael SHAHVERDIYEV (AZE).