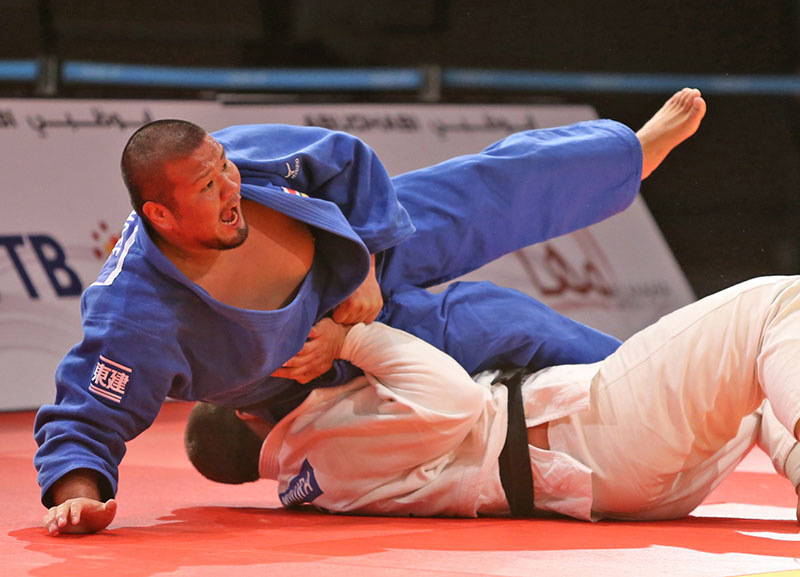 There were two top ten world ranked fighters in this category and all indications were that No. 6 Dilshod Choriev UZB would face No. 9 Kirill Voprosov RUS in the final. But there is “many a slip between cup and lip” and Choriev came unstuck in his semi-final against team mate Sherali Juraev UZB losing by a single yuko. Voprosov however was true to the formbook and made his way supremely to the final where he met the aforementioned Juraev. The Russian looked comfortable and threw his opponent with uchi mata for ippon.

World No. 2 Sergei Samoilovich RUS in taking the gold medal here made certain that the Russians would top the overall medal table. He threw Japan’s Kobayashi Daisuke in the semi-final with makikomi for ippon and then was leading in the final when Uzbekistan’s Ramziddin Sayidov was retired after dislocating a toe.

+100kg Category: MOMOSE NOT QUITE THE FINISHED ARTICLE FOR JAPAN

Japan’s search for a world-class heavyweight continues this time with Momose Masaru coming under scrutiny. Neither Adiljon Tulendibaev UZB or David Moura BRA caused Momose any real concerns and, despite throwing the Brazilian with o guruma for ippon in the final, the Japanese remains uncvnvincing and will no doubt have stiffer challenges in the not too distant future.

Canada’s Catherine Roberge continues to “chase the dream” as she bids to remain competitive at the highest level. In a straightforward field of four she was required to win two contests that she accomplished with some style particularly in throwing Amandah Payet SEY twice in her semi-final with uchi mata. The final against Natalie Powell GBR did not quite live up to expectations as Powell lacked on this occasion the kind of “bite” necessary to unsettle the more experienced Canadian.

The final of the women’s heavyweight was between Emilie Andeol FRA and Maria Suelen Altheman BRA. The Brazilian was the more fancied of the two. But Andeol used clever tactics to control the tempo of the contest and ended up taking a second gold for France.