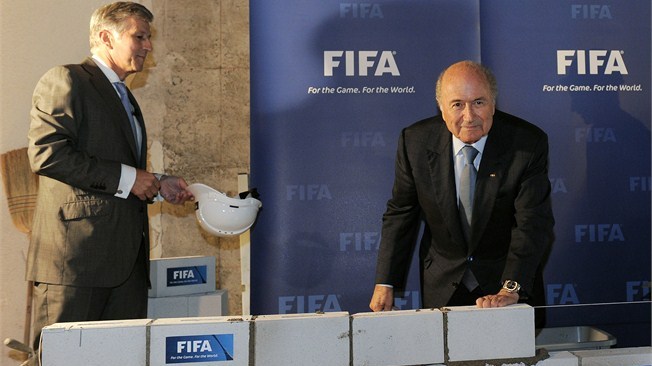 Zurich, April 25, 2013: FIFA, world football’s governing body, is going ahead with its museum project. Instead of being built in FIFA’s grounds on the “Zurichberg” as originally planned, the new cultural attraction will be constructed in the “Haus zur Enge” in Zurich-Enge. The museum is expected to open in April / May 2015.

This morning FIFA President Joseph S. Blatter symbolically started the construction work and with it the launch of the project. “You see a very happy President standing before you in this building today. It may still be a building site, but soon this will be a true meeting place for football and its millions of fans from all over the world. Today is a great day for me personally and for FIFA. I am delighted that we are going ahead with this project in the “Haus zur Enge”. I would like to say a special thank you to everyone who has made this possible.” He also stressed that the plans represent yet more evidence of FIFA’s commitment to Zurich.

During the planning phase for a new museum building at the Home of FIFA, the project management team also searched for possible alternative locations. A few months ago, FIFA came across the “Haus zur Enge” and decided that it would be the perfect location for the museum. The owners of the building, Swiss Life, already have permission to convert the building, so dismantling work can begin immediately. The City of Zurich will, however, have to issue conversion permission for the new use of the building.

Swiss Life is also delighted with FIFA’s project and that the “Haus zur Enge” will soon be a meeting place for football fans from all over the world. “The FIFA museum project is a stroke of luck for Zurich and is a perfect fit for Swiss Life’s investment policy. As the biggest property owners in Switzerland, we place great importance on linking business with urban development,” said Rolf Dorig, Chairman of the Swiss Life Board of Directors. “The FIFA museum at Tessinerplatz will breathe fresh life not only into the surrounding areas, but also into the whole Zurich region. We are very pleased to be part of this project as landlords.”

President Blatter and FIFA Secretary General Jerome Valcke signed the rental contract on 11 April 2013 in the presence of Swiss Life representatives. The contract is valid for 40 years. On 19 April, world football’s governing body officially submitted its plans to the Zurich City Council, who have welcomed the project.

Schedule and use of the building

Dismantling work is already underway in the “Haus zur Enge” and will be on-going until around September 2013. The museum concept will be developed at the same time. Once planning and conversion permission has been received, work on the building shell will start around December 2013, followed by the facade and the technical installations, and finally by work on the museum itself. “We know that we have a tight and ambitious schedule to plan and carry out all of this work, but we are very confident,” said Sacha Menz from the project architects, SAM Architekten und Partner AG in Zurich. The organisation responsible for the construction work will be HRS Real Estate.

The football museum and exhibition areas will occupy the second basement level through to the first floor of the building. The entrance will be on the ground floor. The plans for the museum include a Hall of Fame, 3D displays and interactive games as well as a collection of trophies and shirts to captivate fans from all over the world. Various exhibitions will focus in a particular way on FIFA’s social responsibility programmes, as well as on the promotion and development of football, fair play and the Football for Hope programme.

The museum will not only be a place to store and display memorabilia, but also a vibrant meeting place and discussion forum for all members of the football family, including fans, clubs, associations, friends and suppliers, partners and sponsors. Furthermore, events such as award ceremonies, autograph sessions, media conferences and readings will also be held in a special event area.

The workstations that were also part of the plans for the original project at the Home of FIFA will also be in the “Haus zur Enge” project, with the upper storeys to be converted into office space for approximately 150 workstations. The plans also include 28 apartments. Construction work on the offices and apartments will be completed by mid-2015.

Zurich Tourist Board and neighbourhood pleased with FIFA project

Elmar Ledergerber, the former Mayor of Zurich and the current President of the Zurich Tourist Board, believes that the FIFA museum in the “Haus zur Enge” will be a major boost for the city: “The ideal location for the FIFA museum has finally been found. The search for the best solution was a long and arduous one, but fortunately it led to the ‘Haus zur Enge’. I am looking forward to the FIFA museum and I have no doubt whatsoever that this major football attraction will soon be extremely popular and a fixture in Zurich’s cultural scene.”

Hotelier Christian Frei, who runs the Ascot Hotel at Tessinerplatz, is also thrilled by the FIFA project. “I am delighted that FIFA will be our neighbours. The project is spectacular. The location for such a cultural attraction could not be better, and as a big football fan myself, it will be fantastic to have this football museum just over the road from us.” —- FIFA/Image © Foto-net