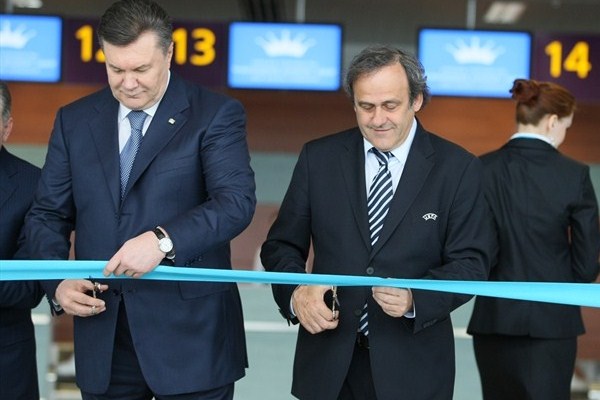 First, Mr Platini visited the new Arena Lviv, which will host three Group B matches, and opened the new terminal at the Ukrainian city’s airport together with Ukraine’s President Viktor Yanukovych, accompanied by the president of the Football Federation of Ukraine (FFU), Grigoriy Surkis.

He then journeyed to the Polish capital Warsaw to visit the National Stadium – the final EURO venue to be completed, it was unveiled in January – and met the Polish sports minister Joanna Mucha, as well as the president of the Polish Football Federation (PZPN), Grzegorz Lato.

The Arena Lviv, in an area of parkland on the outskirts of the city, has a UEFA capacity of 30,000 and opened in October 2011. The National Stadium Warsaw, located on the eastern banks of the Vistula in the district of Praga Poludnie and built on the site of the old Tenth Anniversary Stadium, holds 50,000 and will stage three Group A matches, a quarter-final and a semi-final.

In Lviv, Mr Platini spoke of the hard work carried out in Ukraine to guarantee a festival of football at UEFA EURO 2012. “There are still a few details to finalise to reach perfection – but I am satisfied with the level of preparations,” he said. “I would like to thank the Ukrainian government for all the efforts they have put into the preparations.

“All the changes that Ukraine has undergone in recent years will serve for the benefit of the Ukrainian population at large for years and years to come,” he added. In addition to Lviv, three other cities in Ukraine – Donetsk, Kharkiv and Kyiv – will host UEFA EURO 2012 games, with the final taking place in Kyiv on 1 July.

“I am sure that fans coming will enjoy a fantastic experience with the incredible hospitality of the Ukrainian people,” Mr Platini concluded. “And I am convinced that we will experience a magnificent festival of football in Poland and Ukraine for UEFA EURO 2012. It has been a great challenge for Poland and Ukraine, it has been a great challenge for UEFA – the challenge is going to be won.

“I am very grateful that we did this great work together,” said Mr Yanukovych, who voiced his gratitude for UEFA’s belief in the ability of the Ukrainian government to prepare for the tournament. “Making promises and keeping them has been and remains the matter of principle for Ukraine,” he added.

“Everything is going well,” said the UEFA President after moving on to Warsaw. “I would like to say thank you to the Polish government and all its bodies for the job which has been done.”

Mr Platini reiterated the major legacy that Poland and Ukraine will be left with after the EURO. “This will be a huge heritage for the future,” he stressed. “I congratulate the Polish and Ukrainian people on the fact that they saw the opportunity and took advantage of it.”

“During my meeting with Michel Platini, I heard only positive words,” added Joanna Mucha. “We are prepared for the EURO and everything is going according to the schedule. Only the last details are being sorted out now.”

“I am very happy with this visit,” said Mr Lato, who welcomed the positive assessment made by the UEFA President on preparations in Poland. Image ©Yevgen Kravs