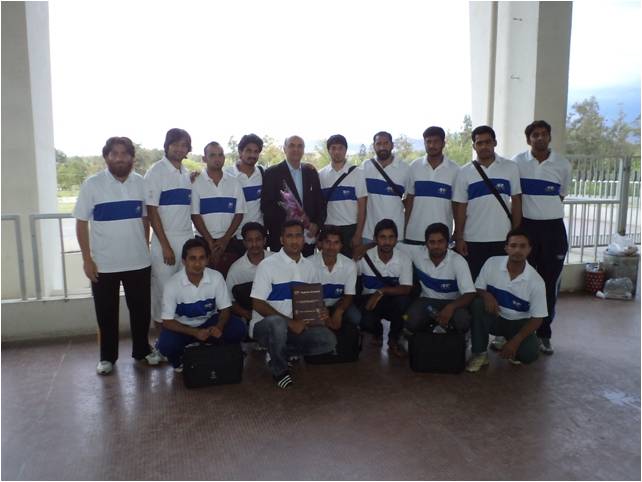 Islamabad-Pakistan, April 13, 2012: PFF Vision 2020 Plan, which the Pakistan Football Federation (PFF) has unveiled on 21 June 2008 PFF Congress, will take Pakistan to new height. This ambitious plan will create pavement to PFF in earning berth in top 15 Asian teams as well earning tickets of World Cup, Olympics and FIFA age-limit competitions in coming decade. But all the coaches had to work harder along with coming coaches to make it reality.” This is stated by Lt. Col ® Ahmed Yar Khan Lodhi TI (M), General Secretary Pakistan Football Federation (PFF) in his message for closing ceremony of AFC C- Certificate Football Coaching Course at Islamabad’s Jinnah Sports Complex on Friday.

Meanwhile, in his message, PFF’s President Makhdoom Syed Faisal Saleh Hayat has urged the coaches to acquire technical know-how and work harder for the promotion of football in the country. Makhdoom added there should be free and frank discussion so that the coaches would be able to share each other’s ideas. He lamented that the coaches should be impartial and implements their knowledge practically on the ground. It is unfeasible to make progress without coaching. Therefore, the coaches must have the ability to watch and scrutinize the strong and weak points of the players while selecting national/regional teams. “I hope this course will hone the skill of the coaches,” he added.

“It’s now easier than ever to become a qualified football coach by getting on the coaching ladder, individuals have the opportunity to progress through the various AFC Coaching qualifications while constantly enhancing their skills and knowledge” stated by AFC Instructor Morteza Mohases.