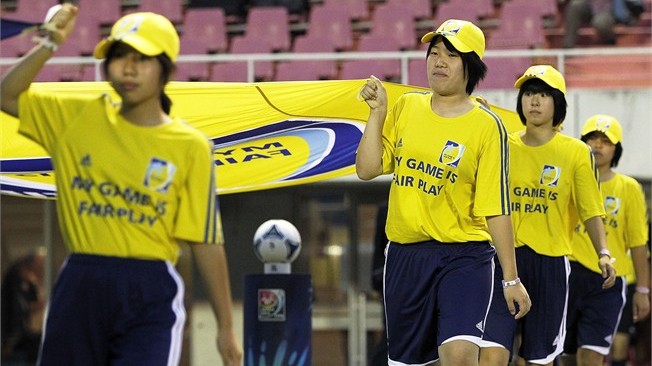 Tokyo – Japan, September 3, 2012: FIFA’s 16th annual FIFA Fair Play Days campaign will kick off at the semi-finals of the FIFA U-20 Women’s World Cup 2012 tomorrow when Nigeria take on the USA, and the Japanese hosts play Germany. The campaign will also take place during the official international match dates between 7 and 11 September 2012.

FIFA President Joseph S. Blatter is once more appealing to footballers around the world to show fair play and respect on and off the pitch.

“Fair play should be an attitude that we all subscribe to,” said Blatter. “As they are role models, I appeal to all players, officials and fans to play fair – on the pitch and off the pitch, during a game and in their everyday lives.”

FIFA recognises the crucial role of fair play and respect in sport and accepts the responsibility to apply them to all sporting activities. Football, as a team sport, can help to demonstrate the importance of tolerance, discipline, respect, and fair play, not only in the game, but also in life. Therefore, FIFA’s Fair Play campaign involves much more than simply promoting fair play on the pitch.

Every September, FIFA puts special focus on Fair Play, a campaign which world football’s governing body has strongly advocated since 1988. While the initiative is at the forefront throughout the year, with a Fair Play Award given at every FIFA tournament and one individual, association or club honoured annually at the FIFA Ballon d’Or Gala, this month is used as a celebration of the mission.

To mark the 15th anniversary of FIFA’s Fair Play Day, launched in 1997, FIFA.com searched through the archives to find 15 interesting examples of sportsmanship during the past decade-and-a-half. By no means an exhaustive list, given the number of fair play gestures which happen across the world every day, this random selection intends to shine a light on an important element of the game we love.

Robbie Fowler denied that he had been fouled in the penalty area by Arsenal goalkeeper David Seaman at Highbury and unsuccessfully attempted to get the referee to change his mind. Fowler stepped up to take the resulting penalty and missed, but team-mate Jason McAteer scored from the rebound. Many people believe that Fowler deliberately took the spot-kick poorly on purpose, but the England striker said at the time: “As a goalscorer it’s part of my job to take it and I wanted to score it. I tried to score. I never missed on purpose. It just happened, it was a bad penalty.”

Arsenal manager Arsene Wenger proposed a replay of the FA Cup 5th Round clash due to the controversial circumstances in which it was won. The winning goal was scored by Marc Overmars, after Nwankwo Kanu failed to return the ball to the opposition after it had been kicked into touch to allow Sheffield United’s Lee Morris to receive treatment for an injury. The replay was held ten days later and Arsenal won that game 2-1 as well.

Paolo di Canio received a pass on the edge of the area when Everton goalkeeper Paul Gerrard fell to the ground with what looked like a serious injury. Instead of taking the shot, Di Canio picked up the ball and pointed to the injured ‘keeper. The whole stadium rose to applaud the striker, who was awarded the FIFA Fair Play Award.

Oliver Kahn was victorious in the final of the UEFA Champions League after a penalty shoot-out. But instead of celebrating with team-mates, the German goalkeeper went straight over to opposite number Santiago Canizares, hugged the Spaniard, and reassured him. UEFA handed Kahn a Fair Play Award for his camaraderie. The striking act of kindness was repeated to Kahn a year later after his errors cost Germany the FIFA World Cup™ during the Final in 2002, when scoring sensation Ronaldo consoled him.

Morten Wieghorst deliberately fired a spot-kick wide while captaining a Denmark League XI against Iran. Thinking he had heard the referee whistle for half-time, an Iranian defender picked up the ball inside the penalty area. However, the whistle had come from the stands. After the match, Wieghorst said: “It was unfair to capitalise on that”. The midfielder was named Denmark’s player of the year in 2003 and won an Olympic Committee Fair Play award.

Miroslav Klose went down in the box under the challenge of Bielefeld goalkeeper Mathias Hain, the ‘keeper was booked and a penalty was awarded. But Klose appealed to the referee that the goalkeeper had touched the ball first and that it was not a penalty. The referee overturned the decision and rescinded the yellow card. Klose received a fair play award and said: “It’s a bighonour for me to receive this award. But I am also a bit irritated. For me, it was something you should always do. I would do it again – always.”

Jan Vertonghen tried to play the ball back to the opposition after a stoppage but his attempted backpass flew over the goalkeeper and into the net to put his side 3-0 up. As a result of this, the Ajax team allowed Cambuur to score a goal of their own. The game finished 3-1.

Defender Clive Clarke, on loan to Leicester City from Premier League side Sunderland, suffered a cardiac arrest during the half-time interval of the League Cup clash, which was abandoned after Clarke was rushed to hospital. The scoreline at the time was 1-0 to Nottingham Forest and, when the match was replayed, Leicester allowed Forest ‘keeper Paul Smith to walk through the defence to put the score back to what it was when Clarke suffered his cardiac arrest.

The intense rivalry between Liverpool and Everton is one of the fiercest in the game, and yet that was put aside after a tragic incident in the city. 11-year-old Everton fan Rhys Jones was shot dead less than a week before the match and Liverpool took an unprecedented move before their Champions League game at Anfield. Instead of the Liverpool anthem You’ll Never Walk Alone, Liverpool played the Z-Cars theme tune traditionally used at Goodison Park. The move was a tribute to Rhys and players of both sides wore black armbands to commemorate the life of the young Everton fan.

Marseille were reduced to ten men after Slovenian striker Valter Birsa went down under the challenge of Bakary Kone. However, the forward appealed to the referee, attempting to have the decision overturned, which it was. Birsa said after the match: “He did nothing, just put his hand on my back. There was no bad intention from Kone. We both went for the ball and he fell on me. But nothing happened, so I asked the referee not to expel him.”

In a crunch match for both sides, Steel Azin goalkeeper Hamid Neshatjoo put his body on the line and received a blow to the head in a defensive situation. Amin Motevaselzadeh picked the ball up outside the box, took it past a player and, realising the goalkeeper was injured, hit the ball out of play instead of taking aim at the goal for an easy finish. Moghamvemat ended up losing the game 2-1 and Motevaselzadeh was awarded the Fair Play player of the year for the league in 2010.

During the first leg of this final, Gustavo Rodas received a red card. The disciplinary committee of the Peruvian FA overturned the decision but Franco Navarro, Huanuco’s coach, thought that was not the right decision. Therefore, Navarro informed the Universidad coach that Rodas would not be selected for the second leg, in order to honour the original decision and suspension. Universidad San Martin went on to win the second leg and the tournament. Navarro received the 2010 Fair Play award and the 2010 Best Coach award. He said: “I am overwhelmed with compliments. I receive this award with joy, and I know that a humbled group of players like ours are proud of a gesture like this.”

After Vasco’s head coach Ricardo Gomes suffered a stroke during a match against Flamengo, Vasco da Gama played their next match while he was in hospital recovering. Not only did his own players come onto the pitch carrying a banner with words of encouragement, so did Ceara’s players. As the two teams lined up before the match started, they hugged each other around the centre circle and prayed for his swift recovery.

An uncontested drop-ball was set to restart the match, with the intention that the ball was returned to Pachuca by Estudiantes. However, the ball was instead dribbled towards goal by Estudiantes, resulting in a foul by the Pachuca goalkeeper and a penalty for Tecos. Estudiantes coach Mauricio Gallaga was dismayed by his young charges’ unsporting behaviour and gave the order to kick the penalty wide. Gallaga said after the match: “People keep asking me what I would have done if the score was tied. My answer is: I would have done the same.”

St Pauli striker Marius Ebbers was presented with an easy chance to put his side ahead but the ball struck his hand and the goal was scored illegally. The referee did not see the incident clearly and allowed the goal to stand, only for Ebbers to clarify that he used his hand in scoring the goal and for the effort to be chalked off. FIFA President Joseph S. Blatter said: “Great example set by Marius Ebbers. Goes to show fair play is still possible in football and doesn’t stop you from winning either.” —- FIFA/Image © Getty Images