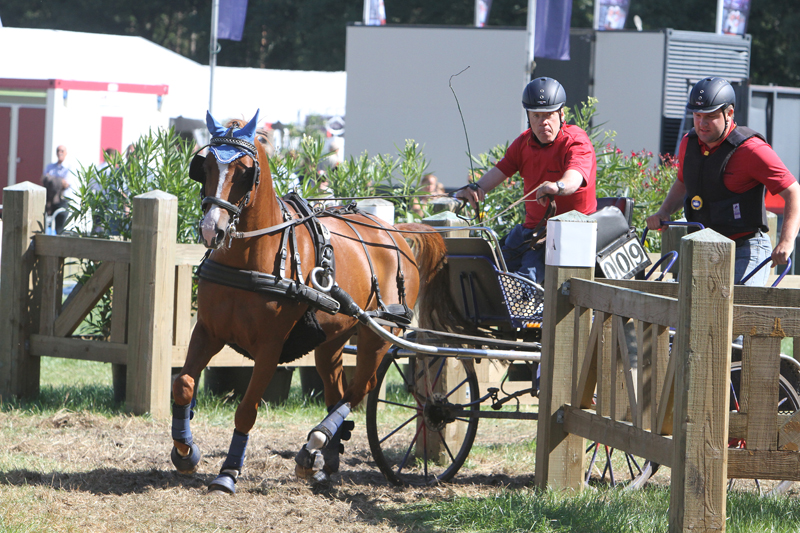 By Cindy Timmer, Breda (NED), September 03, 2012: Title defender Heiner Lehrter from Germany has renewed his gold medal after the exciting final obstacle driving competition of the FEI World Para-Equestrian Driving Championships in Breda, the Netherlands. Home driver Jacques Poppen was leading the pack going into the final phase, but knocked one ball too many and went home with silver. His compatriot Jan Ranzijn won the bronze medal. The Dutch team took gold in the nations competition, the silver medals went to Germany and Great Britain was very happy with their bronze team medal.

The FEI World Para-Equestrian Driving Championships were organized for the eighth time and for the second consecutive time in Breda. The Dutch venue attracted a very strong field of competitors with 21 drivers from seven nations and five teams. The Outdoor Brabant event not only warmly welcomed the para drivers, but also hosted a CAIO for horse four-in-hand team, an international competition for pony four-in-hand and the Dutch four-in-hand Championships.

As well as the Driving competitions, there was also an international Eventing competition and national Jumping and Dressage classes. All disciplines were smoothly run at the Prinsenhoeve Estate in Breda and the event attracted many spectators, especially on the marathon and Cross Country days. The FEI World Para-Equestrian Driving Championships were well integrated in the Driving discipline in Breda and all drivers profited from each other’s experiences.

Heiner Lehrter has competed in every World Para-Equestrian Driving Championship since the introduction in 1998 and has won many individual and team medals, including individual gold in 2010. Heiner drove a different pony to his winning partner two years ago in Breda. This time he drove the nine-year old Dashwood, owned by his wife Sabine, and was lying in third after the dressage, eight points behind the leader Jacques Poppen (NED).

“I was first to go in Dressage and I am sure my points would have been different if I had had a different starting position”, Heiner Lehrter said. “The gap with Jacques after dressage was so big that it was nearly impossible to make it up in the marathon.”

Lehrter’s team member Markus Beerhues motivated him to keep fighting and told him his chances were not gone yet. Heiner was the last of the German team members to go in the marathon and when he knew his two colleagues had got around without any problems and their silver team medal was secure, he was free to do whatever he liked in the marathon. “I said to myself, let’s go for it, I have nothing to lose!”

He set the fastest times in four of the six beautiful marathon obstacles, designed by Dutch O-course designer Johan Jacobs. “Dashwood has always been ridden by my wife. I have been driving him together with my other horses, but I only started to drive him intensively eight weeks ago. I have a very good relationship with this pony and he with me. He doesn’t like water very much, but luckily there were some water splashes in the first marathon phases so we could practice a little and he went into the water obstacle without any hesitation.”

After dressage and marathon, Lehrter had moved up to silver in the standings, only 1.72 penalty points behind Poppen. There had only been one double clear round in the obstacle driving competition before Lehrter went into the arena. Lehrter knocked down one ball, which gave last starter Poppen some breathing space. But Poppen had two knockdowns and when the second ball dropped, 51-year old Lehrter knew he was World Champion again: “I am very pleased with my results, also in the cones course. We have trained a lot in cones and the course suited me. It is fantastic to win here in Breda again!”

Jacques Poppen, who was World Champion in 2008 and bronze medallist in 2010, had an extremely good start in dressage to head the field with his beautiful seven-year-old Arab-Friesian gelding PP. Poppen and PP had impressed at several competitions before, including victory at the German Championships for para-equestrian drivers in Greven. Poppen and PP are a young combination and only started working together in February of this year.

“We were very pleased with our dressage results,” Poppen said. “We have worked towards this event the whole year and we had to fight for it, it did not come easy for us. We did expect that it would go well, but we remained nervous until the scores came out!”

In the marathon, Poppen and PP lacked the necessary experience at some points, but they still finished second behind Lehrter and kept their lead in the standings. “It was very heavy. The turns were very tight and the obstacles were very technical. Normally you give the horses some time to recover after an obstacle, but there was no time for that. But this is how a World Championship has to be. I spoke with four-in-hand driver Koos de Ronde the evening before the marathon and he advised me to go for it from the first obstacle on. Unfortunately I could not steer PP exactly the way I wanted to, we just need some more experience together. We have only done eight competitions and there is still some fine-tuning to do.”

Poppen dropped to silver in the final standings after he had knocked two balls in the cones. “I was not attacking, I blame myself for this. But I am nevertheless happy with individual silver and team gold. Of course, I would have liked to win gold again, but I am also realistic. I have homework to do and I am already looking forward to the next World Championships in two years!”

Jan Ranzijn is the senior member of the Dutch para-drivers. Now aged 67, he is only a few months younger than Jim Mc Crae (IRL), the oldest para competitor in Breda. Ranzijn was the Para World Champion in 2006 with a horse pair and drove as a singles competitor in 2008 and 2010. Ranzijn also competes in regular driving competitions in The Netherlands with a horse team.

Ranzijn competed with his home-bred eight-year-old Friesian gelding Nico van de Haffriehoeve and was very proud at him. “We have been given the opportunity by a sponsor of the Royal Dutch Equestrian Federation to have a personal trainer for the whole season,” he said. “My trainer is a former tandem driver and he has helped me a lot in dressage. I have learnt to drive more boldly and this has paid off.”

Ranzijn and Nico came second in the dressage, but in the marathon, with assistance from his loyal groom Sonja, Nico lacked the necessary speed driving out of the obstacles and they came eighth. This left Ranzijn in third place after dressage and marathon, and his round in the cones secured individual bronze and the team gold. “I had hoped for bronze and I am very happy that I have achieved this,” he said afterwards. “Being 67 years old, I realise how fortunate I am that I can experience this. I enjoyed the competition very much and I enjoy driving every day. Nico is getting stronger, so I hope to be part of this wonderful team again in two years.”

Teams from The Netherlands, Germany, Great Britain, United States of America and Ireland battled it out in the nations competition. The Dutch drivers took the lead after dressage and held on throughout to claim team gold. With Poppen, Ranzijn and Adriaan Struyck, who finished fifth in the individual standings, the Dutch put down top performances in all three phases of the competition. The Germans tried very hard to beat the Dutch, with Lehrter, Markus Beerhues and Hubert Markett all in the top six, but they had to be content with silver. The British trio, with the two lady drivers Lucy Mary Barclay and Deborah Daniel teamed up with Mick Ward, were very happy with their bronze medals.