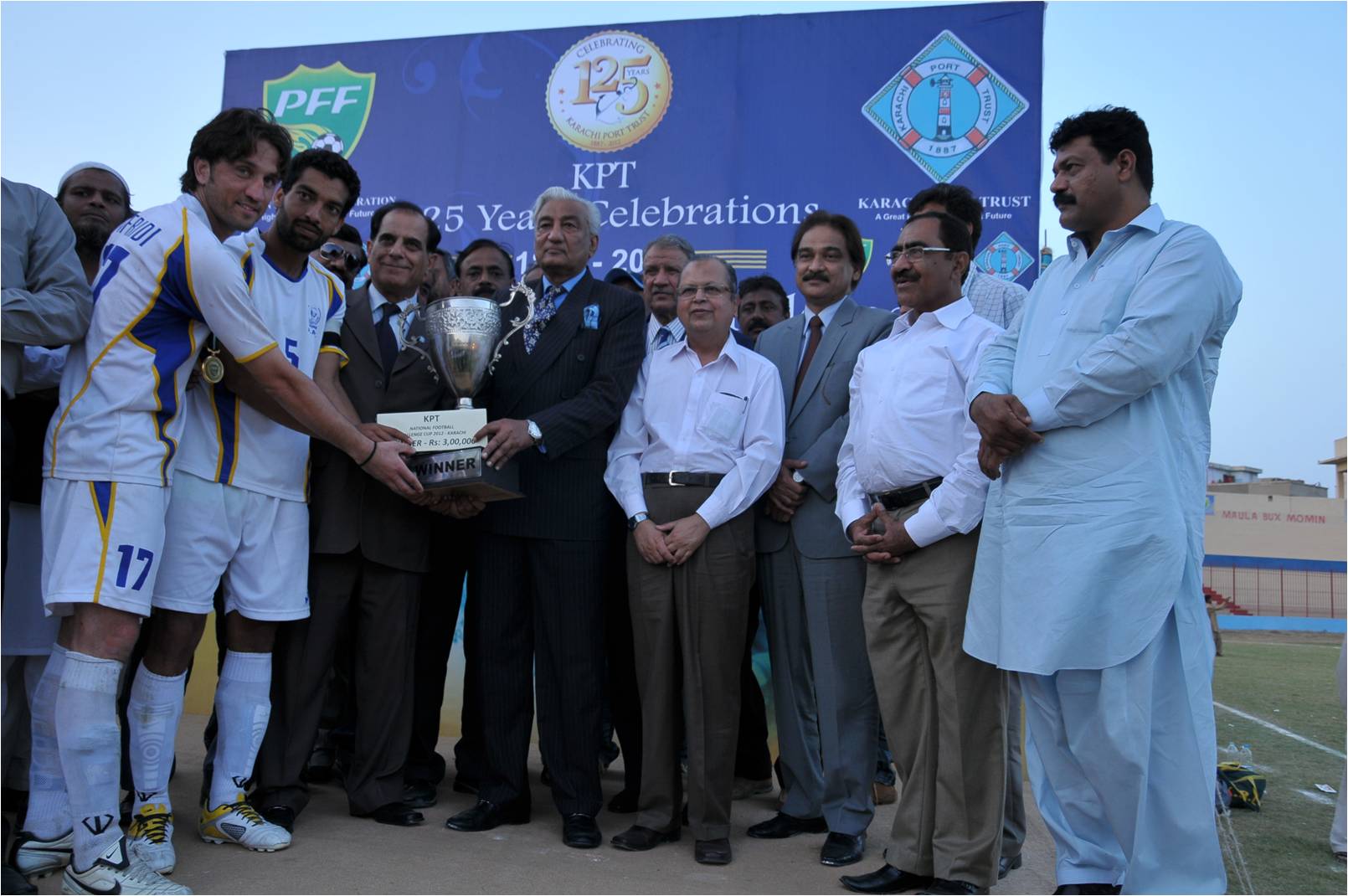 Karachi-Pakistan, March 24, 2012: Khan Research Laboratory (KRL) routed Karachi Electric Supply Company (KESC) in the sudden death session to win the KPT National Football Challenge Cup-2012 final by 3:1 here on Friday in front of a sizeable crowd at the KPT Football Stadium, Karachi. The kickers from KRL were Kaleem Ullah, Shahid Ahmed and Zia-ul-Islam and Muhammad Essa Khan was the only kicker from KESC, after both the teams were locked 0-0 in stipulated time and even the extra 30-minute play failed to bear fruit despite the fact the both teams missed the certain chances.

According to the press release issued here by Pakistan Football Federation (PFF), the final was really a treat to watch between two top teams of the event, the match started in a very positive manner and both the team’s players started to attack each other’s goal post right from the beginning. Syed Khadim Ali Shah, President Sindh Football Association was the Chief Guest along with Lt. Col. ® Ahmed Yar Khan Lodhi TI (M), General Secretary PFF, Ghulam Ali Mammon, General Manager Planning & Development and Wing Comd. ® Pervaiz Saeed Mir, Director Development & Competition was the chief guest of the final.

Earlier General Secretary PFF had said that football the most widely played and popular game of the world has been put on right path by PFF President Makhdoom Syed Faisal Saleh Hayat. His emphasis on mass activities of youth development, coaching and refereeing has started showing positive indication of bright football future in Pakistan. This has been possible only because of employing appropriate professionals for the right jobs and paying emphasis on fair play, discipline and merit.

While talking to the media, General Secretary PFF said that there was a time when organizations including those of the government such as Customs, HBL and Allied Bank etc used to patronize various sports but over a period of time owing to financial constraints they almost abandoned this. KPT took the initiative and hoped that other corporate organizations would emulate it in an organized manner and kept it going in a systematic manner as the KPT is doing.

At the end he thanked Chairman KPT and said that KPT Chairman Mr. Muhammad Aslam Hayat showed his great passion for the game of football by making the KPT National Football Challenge Cup 2012 an integral part of the 125 Years Celebrations of KPT. We highly admire the support of KPT for the development of football in Pakistan.