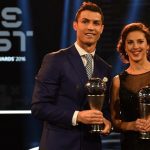 Winner of the inaugural The Best Men’s Player award in January 2017, the Portuguese star was recognised by FIFA as the player of the year for the fifth time in his career, while 24-year-old Martens claimed her maiden award.

Both players’ coaches on the way to their European titles – Real Madrid CF’s Zinédine Zidane and the Netherlands’ Sarina Wiegman – were also voted The Best.

The Best FIFA Goalkeeper award, given to Italy and Juventus FC’s Gianluigi Buffon, who was also chosen as the goalkeeper of the FIFA FIFPro World 11.

Summary of the season’s individual awards presented at the London Palladium this evening:

Team of the season

Thousands of football players from around the world voted for their 11 peers who form this season’s FIFA FIFPro World11, which was also revealed in London:

Of great goals and fans

Two awards were voted for directly by football fans from all around the world, who had their say on FIFA.com:

Olivier Giroud With 36.17% of the 792,062 votes, Olivier Giroud’s incredible scorpion kick for Arsenal against Crystal Palace was chosen as the best goal of the season.

Celtic Supporters The Celtic fans received 55.92% of votes and were commended for the stunning 360-degree card displayed around Celtic Park during the final match of the Scottish League season, paying homage to the 50th anniversary of the club’s European Cup title of 1967.

A show to remember

The evening at the London Palladium also included the handover of the FIFA Fair Play Award, which recognised the gesture by Togolese player Francis Koné, who performed life-saving first aid on an opponent – Bohemians 1905’s goalkeeper Martin Berkovec – during a Czech League game in February.

There was plenty of artistic prowess on stage as well, with the show brilliantly hosted by Golden Globe and Screen Actors Guild Award-winning actor Idris Elba and featuring dazzling performances by dance and percussion group Stomp and English rock band Kasabian.

The winners of the four individual The Best awards were determined through a voting process in which four groups had an equal say: football fans, selected media representatives and the captainsand head coaches of national teams from around the globe. Here is how they voted:

The inaugural goalkeeper award was voted for by a panel of FIFA Legends as follows:

And these are the details for the awards decided by public voting: